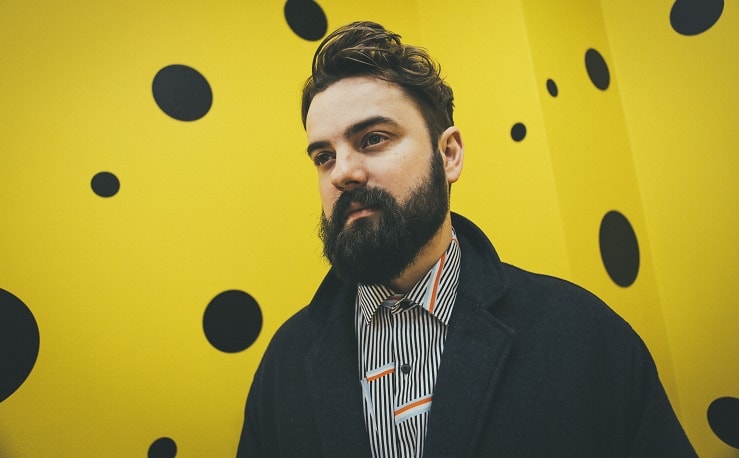 This period of prolific songwriting included such experiments as recording an album’s worth of material on a dictaphone, before the Tottenham-based, Scottish-bred singer emerged with a set of material to run by the Cocoa Futures rhythm section of Dave (drums) and Nick (bass). The next stage was finding a producer best-suited to draw the rich seam from Greg’s singular yet commercially inclined songs. Greg explains: “It was bit of a happy accident. I’d made a Spotify playlist called ‘drums sounds i like’ which had loads of GoGo Penguin tracks and a couple of Dutch Uncles tunes. I thought I’d research who’d made them ‘cos they sounded banging. Turns out it was a lad called Brendan in Manchester, so I dropped him an email and he was up for working together.” So Greg, Nick and Dave spent a long weekend at Manchester’s Low Four studios, working with Brendan Williams (he of Dutch Uncles and GoGo Penguin fame, as well as notable others such as Kiran Leonard and Koalas), completing six diverse yet sonically consistent tracks, the first of which, ‘Sink In The Water’, is released in March. These half dozen thrilling pop moments, whimsical, catchy and fresh, produced with exacting attention to detail and dynamic, are sure to more than sate those who’ve wisely been keeping Cocoa Futures on their ones to watch lists these past 18 months.

Cocoa Futures: Sink in the Water

Taking a turn for the direct, for a sense of art-funk minimalism that sets it apart from Cocoa Futures’ first EP, ‘Sink In The Water’ is a steadily crescendoing, unidirectional dance banger that hinges on a skeletal rhythmic groove. Its pared-back foundations allow room not only for plenty of percussive add-ons but also for frontman Greg’s experiments with the assorted synths and instrumental toys he discovered to his delight while recording the song in Manchester’s Low Four Studio. Greg’s lyrics were influenced stylistically by his current playlist favourites The Blue Nile and Prefab Sprout, and thematically by the contradictory impulses of the ageing process. “Getting older doesn’t always feel like growing,” he explains. ”It can feel a bit like sinking. There’s nothing inevitable about becoming a better person as you grow up and learn more.” Downbeat? Not a bit of it. “But maybe sinking is pretty good. Anyway, to keep things peppy, ‘Sink’ includes a nice happy major shift at the end!”