A unique voice emerging from Soho’s bohemian arts scene, Brudini spent his upbringing in Norway before uprooting himself to settle in London after a nomadic period absorbing the swarming metropolises of Tokyo and Paris. A regular fixture in Soho’s Society Club, Brudini has attracted praise from NYC punk manager legend Danny Fields (The Stooges, MC5, The Ramones) for his erudite approach to music and lyricism. He has also collaborated with Lulu Gainsbourg (son of the famous French legend) and Californian writer Chip Martin. A product of both literary modernism and rock and roll, Brudini’s music evokes a wealth of artists and mediums. 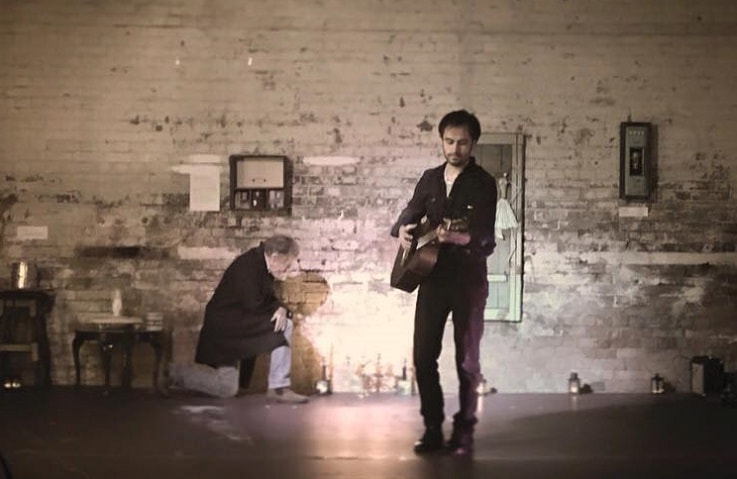 From Jim Morrison and the chansons moderne of Jacques Brel, to the avant-garde driving beats of Krautrock via the writings of Hamsun, Fante and Sartre, he comes off like a new-age lounge crooner in some smoky existential dream parlour. Wielding a live show that’s psychedelic to the point of being a total sensory experience, Brudini can always be found in that cosmic last chance saloon, uniting wayfarers and music lovers across the void through his cinematic plainsong. “’The Nightcrawler’ is the tale of a jaded, worn-out character’s inevitable march into darkness; briefly overcome by a triumphant moment of warmth and nostalgia, before the night swallows it all.”

An ambitious and beautifully bittersweet debut single from a vital new London sound, Brudini’s ‘The Nightcrawler’ is the odyssean portrayal of a limping vagabond whose nightly descent into darkness is interrupted by a moment of nostalgia and connection to the world that’s ostracised him. Recalling the organic textures of Radiohead’s A Moon Shaped Pool of yesteryear, Brudini builds his own inimitable style with an artful flair for arrangement. Cannily expressionistic in its use of sound to convey story, – an abrupt swell of strings marks the moment his flaneur catches the nauseating light of the setting sun, for instance – Brudini’s ambition transcends the framework of popular music and puts him in a tradition of narrative songwriters like Nick Cave and Scott Walker.