BioShock is a shooter unlike any you’ve ever played, loaded with weapons and tactics never seen. You’ll have a complete arsenal at your disposal from simple revolvers to grenade launchers and chemical throwers, but you’ll also be forced to genetically modify your DNA to create an even more deadly weapon: you. BioShock is a first-person shooter video game developed by 2K Boston (later Irrational Games) and 2K Australia, and published by 2K Games. The game was released for Microsoft Windows and Xbox 360 platforms in August 2007; a PlayStation 3 port by Irrational, 2K Marin, 2K Australia and Digital Extremes was released in October 2008, and an OS X port by Feral Interactive in October 2009. A mobile version was developed by IG Fun. The game’s concept was developed by Irrational’s creative lead, Ken Levine, and was based on the ideas of Objectivism as promulgated by Ayn Rand, while incorporating influences from other authors such as George Orwell. The game is considered a spiritual successor to the System Shock series, which many of Irrational’s team including Levine had worked on previously. 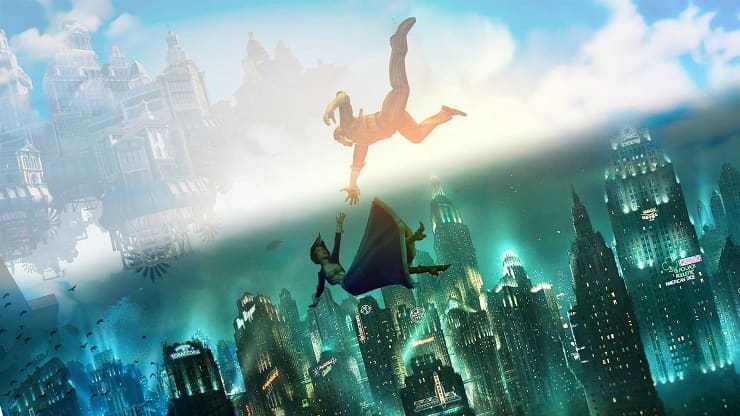 BioShock is set in 1960. The player guides the protagonist, Jack, after his airplane crashes in the ocean near the bathysphere terminus that leads to the underwater city of Rapture. Built by the business magnate Andrew Ryan, the city was intended to be an isolated utopia, but the discovery of ADAM, a genetic material which can be used to grant superhuman powers, initiated the city’s turbulent decline. Jack tries to find a way to escape, fighting through hordes of ADAM-obsessed enemies, and the iconic, deadly Big Daddies, while engaging with the few sane humans that remain and eventually learning of Rapture’s past. The player, as Jack, is able to defeat foes in a number of ways by using weapons, utilizing plasmids that give unique powers, and by turning Rapture’s own defenses against them. BioShock includes elements of role-playing games, giving the player different approaches in engaging enemies such as by stealth, as well as moral choices of saving or killing characters; additionally, the game and biopunk theme borrow concepts from the survival horror genre. BioShock received critical acclaim and was particularly praised by critics for its morality-based storyline, immersive environments, and its unique setting, and is considered to be one of the greatest video games of all time. It received several Game of the Year awards from different media outlets, including from BAFTA, Game Informer, Spike TV, and X-Play. Since its release a direct sequel has been released, BioShock 2 by 2K Marin, as well as a third game titled BioShock Infinite by Irrational Games. A remastered version of the game was released on Microsoft Windows, PlayStation 4 and Xbox One on September 13, 2016, as part of BioShock: The Collection, along with BioShock 2 and Infinite. Wikipedia®