Sean Michael Anderson (born March 25, 1988), better known by his stage name Big Sean, is an American hip hop recording artist from Detroit, Michigan. Big Sean signed with Kanye West’s GOOD Music in 2007, and then in 2008 signed with Def Jam Recordings. After releasing a number of mixtapes, Sean released his debut album Finally Famous in 2011. He is scheduled to release his second studio album Hall of Fame on August 27, 2013. Wikipedia®.

Sean Anderson, a.k.a. Big Sean, is the newest artist signed to G.O.O.D. Music/Island Def Jam at the young age of 23. Sean was born in Santa Monica, CA and relocated to the west side of Detroit, MI when he was 2 months old. He was raised by his mother and grandparents, who worked steadfastly to instill in him the principles of hard work and determination. Sean attended the Detroit Waldorf School, a school of art, from Kindergarten to 8th Grade where he was introduced to a spectrum of art and culture. He later attended Cass Technical High School where he furthered his music career, met life long friends, and gained the support of fans and peers as he independently sold copies of his music. Sean gained a strong relationship with 102.7FM, a local radio station in Detroit where he displayed his rhyming skills weekly. There, he met Kanye West after a radio interview in 2005 and got a chance to display his talent by freestyling for Mr. West, giving him a copy of his music and sending numerous tracks for him to critique. After months of submitting songs and numerous meetings, Sean finally got the call from Kanye West himself saying that he wanted to sign him. Big Sean officially signed to G.O.O.D Music in 2007 and then signed to Island Def Jam in 2008.

[Verse 1]
All this bread can’t be too good for my cholesterol
Don’t come round talking loudly, fuckin up my repertoire dawg
I can’t like bruh lately I’ve been stressin heavily
I’m sippin, poppin, smokin on whatever take the pressure off
You bitch you, F.F. Imperial to my burial
Dodging every bullet and venereal
Anti-fuckboy material
Till I’m dead, I’m living proof
If you focus on what’s in front of ya
And not what’s in the peripheral, let’s go!

[Verse 2]
I got three jobs like I’m Jamaican oh
I need three wives like I was Haitian oh
One cook, one clean, the other PMSing
“No habla ingles”, if police have questions they don’t know what that mean nigga
They say Detroit going through the great depression still
It’s been depressed so long boy I can’t even tell the pressure here
My home boys still gon pull up on them rims big as a ferris wheel
So many rides up on the curb my lil cuz thought the fair was here
Like oh! A primo, top spot redeem code, for who?
My team and we might take a trip to Jamaica Montego
Pussy and flamingo
Got me thinkin “fuck I need to sleep for?” Huh?

[Outro]
Ay let me get the uh
Lil bitch.. 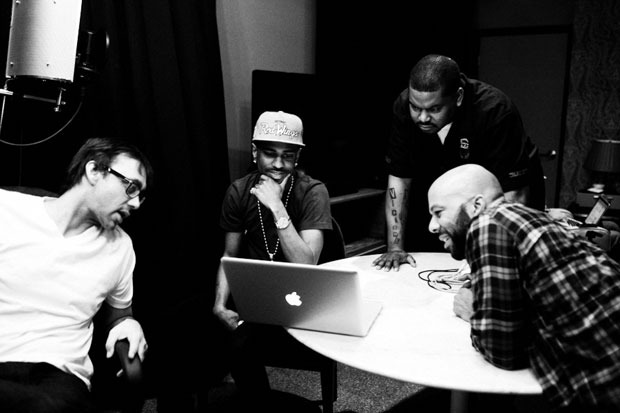