The debut full-length album from Vancouver’s Bear Mountain, 2013’s XO, is an exuberant whirlwind of an album that strikes a balance between long-form instrumental techno and soulful, vocal-driven dance club anthems. Centered around the duo of singer/songwriter Ian Bevis and guitarist Kyle Statham, Bear Mountain also includes Ian’s twin brother, drummer Greg Bevis. The trio build its densely layered dance music by mixing live and sampled drums, ’80s-sounding keyboards, and Statham’s arpeggiated, delay pedal-drenched guitar lines. Soaring on top of all of this is Ian’s soulful tenor croon, often tackling the hook that, in a house track, would ordinarily be provided by a sample. This combination of electronic meets electric instrumentation gives Bear Mountain’s largely dance-oriented music an organic, somewhat psychedelic, improvisational quality, as if they were playing and mixing the tracks live. Over half the songs on XO are instrumental; they’re woozy, often dizzying, but each still has a melodic through-line to keep your attention, even amid disparate swirls of abstract sound. Bear Mountain’s influences are definitely hard to pin down, spanning genres like R&B, jazz, Latin, orchestral pop, dance-rock, and house. This cross-genre approach means that Bear Mountain fit just as nicely next to alternative soul acts like Under the Influence of Giants and Scissor Sisters as they do next to more cutting-edge artists like Cut Copy and Frankmusik. Tracks like “Congo,” “Faded,” and “Sing” are uplifting, infectious club-ready cuts that move both your soul and your feet. ~ Matt Collar

Bear Mountain – Everybody Wants To Rule The World

Bear Mountain, the electronic-pop foursome out of Vancouver, officially released yesterday their cover and video of Tears for Fears’ classic, “Everybody Wants to Rule the World” (they played this on their tour last year). The melodies stay true to the ’80s hit, but they add their own personal touches by adding more synth, electronic beats, and a more noticeable guitar riff. It’s a great cover of a great song. The video is also impressive as it was done in a single take. While we can see Ian and Greg Bevis and Kyle Statham (who is decked out in the hippie, rainbow shirt), we have to assume Kenji Rodriguez is the lead dancer (the one with the UFO contraption on his head). After all, Kenji does have the most rhythm in the band. – Ben Yung

Stirring and soulful, Bear Mountain blends syncopated bass lines and arpeggiated synth chords with live instrumentation and soaring vocals to create a sound that is both deeply moving, and sweetly captivating.

Bear Mountain – Everybody Wants To Rule The World Lyrics: 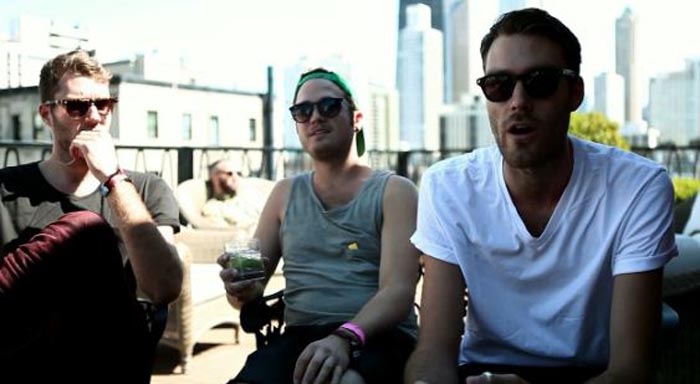