Skip to content
Home » Music » Band of Skulls – Be Mine

Band of Skulls are an English alternative rock band from Southampton, consisting of Russell Marsden (guitar, vocals), Emma Richardson (bass, vocals), and Matt Hayward (drums). The group formed after meeting in college, although Marsden and Hayward have been friends since school. Initially, the group played at night clubs in the Greater London area and recorded some demos under the name of Fleeing New York before changing their name to Band of Skulls in November 2008. The band’s original demos were recorded in their father’s shed-studio. Band of Skulls debut album Baby Darling Doll Face Honey, distributed by Shangri-La Music, was released exclusively on the iTunes Store on 6 March 2009, followed by a general release on 20 March. The track “I Know What I Am” was chosen as iTunes’ free Single of the Week to coincide with the digital release. The song was also featured in the soundtrack for TV series Friday Night Lights, Volume 2, which was released on 4 May 2010. The song also appeared in Guitar Hero: Warriors of Rock. Another track that was not actually on the album, “Friends”, was included on The Twilight Saga: New Moon soundtrack in November 2009. On 13 October 2012, Band of Skulls played the 11th Annual Austin City Limits Music Festival. The show was briefly interrupted by a rainstorm that soaked the front of the stage, including Russell’s pedal board, prompting the band to leave the stage while crews dried and moved the affected equipment. The band was able to return and complete their set after about a 10-minute delay. Wikipedia®.

Band of Skulls – Be Mine

Band of Skulls – Be Mine Lyrics: 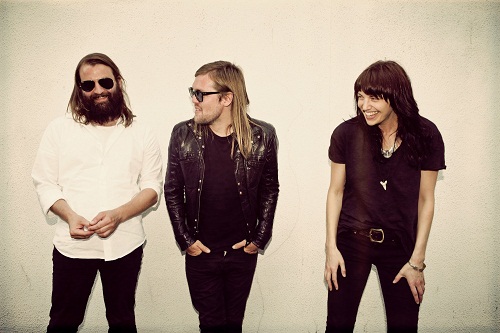