Skip to content
Home » Music » Audio Push – Come As You Are

Audio Push is an American hip hop duo from Inland Empire, California, known for the West Coast hip hop dance, Jerkin’. The group consists of Oktane (Julian Brown) and Pricetag (LJ). In 2009, the duo were signed to Interscope Records. The duo had their first hit single with “Teach Me How to Jerk”. In August 2010, Audio Push released a second single, “Up n Down”, which showcases the group’s softer side. On this offering, the song has much more of an R&B feel to it as the beat consists of soft piano chords blended with sporadic finger-snaps, and a simple bass line. The song was composed by Boston-based production team, Kadis and Sean. The track became available for digital download on iTunes on August 17, 2010, and the music video was released in September 2010. In November 2010, Audio Push released two singles: “It’s Going Up” (ft. Soulja Boy) and “Body Rock” by Mann (ft. Audio Push), In 2012 they released via BLKDMNDS, the singles “Extras” and “Wassup” off of their mixtape Truth Be Told. In 2013, they released a mixtape Come As You Are and signed to producer Hit-Boy’s Hits Since ’87 record label. In 2012 Signed with Hit Boy’s record label “Hits Since 87 Inc” a part of Interscope records, run independently by Hit Boy himself. Since signing with HS87 have brought forth marvelous music that consists of different genres not just Hip Hop/Rap, also R&B, etc. Most known for their song “Shine” off of the Come As You Are album in 2013. Wikipedia®.

Audio Push – Come As You Are

Audio Push – Come As You Are Lyrics:
I go to sleep wide awake and I wake up tired
You niggas go to sleep as rappers and wake up fired
If this is the first thing you hearing that makes you already late
This is perfect, I start with all things I hate, lot like this
I hate people that follow trends and wear the same fashion
I don’t like people that hear whack music and say it’s classic
I hate when people bring up, teach me how to jerk
‘Cause now my lyrics merk and they just salty I’m amazing at it
Bring it back, it’s time for me to address stress over these niggas
I’m having a hard time getting impressed over these niggas
I think that you’re gonna hear this and think that it’s a negative song
When you should just change and prove my negative’s wrong
Moving on, I hate people that don’t rep their home town in fear of being lame
Y’all said it, I hate people that don’t rep their home town in fear of being lame
The game don’t change ’cause it’s like so many people try to be whole in fear of being dame
As these new boys wings get clipped by the new young guns of the game
So don’t crisscross my words, nigga, you don’t hear this from California
So I just we’re just outcasts, now can you smell the stink on you?
What the fuck is up? These niggas fucking nuts off of that endo, not even a little
Nigga, this is the intro and your problems are stronger than your legs
And you can’t run very far so grab your sins and your friends and come as you are
Heavenly Father, please keep Satan far from my path
And keep these fake frauds and trifling broads away from my stash
They say when you give, don’t give to receive and give what you feel
So if I’m gonna give y’all anything, I’m gonna give y’all everything
Now close your eyes and picture this crib with no grass in the front
With a Ford Taurus in the driveway with no gas’
All the way to school momma asking if I’mma pas or gonna flunk
‘Cause I sit in class writing raps all day ’cause I got the passion to stunt
But I didn’t need no class to pass ’cause I know the math
Used to rock my ‘ inside out just to show the town
Southern California where them light skin bitches know they bad
From the area where niggas love their mommas but don’t know they dance
But momma raised me well, all by herself
Even though we used to bump heads, I be pissed off on that bunk bed
Slamming doors, talking slick, acting like I’m running shit
Party jumping on the weekend but I’m stuck on punishment
Get fed up and I move out, her pride high, she let me go
So work with H Team, my big homie, he help me go
Told me get to the music, be careful who you trust
Two things you better not ever give that’s up or a fuck, nigga, what
So I teamed up with Aqua, seen the top we made, the plot to take the spot
Like fucking not, we kicking doors and breaking locks
Deep lockdown, Pete got so many styles, kissing bitches that look like Jada Pinkett
She Gucci wow, wow, now
Since we made it, jerk it, it’s on the world, we repped in like white boy sign
They can’t rap, it’s all these discussions, hoe you mean to tell me
Since we dance our music ain’t bumpy?
‘Cause please, let’s not forget, 2Pac was on stage humpty humping
Back up dancing like ‘when in fact he was good at singing that
Just to say your judgment ain’t best, just shooting gap
I pray to Christ and wish my haters confusion, I eat nine on nine, forever lost in the music
Come as you are. 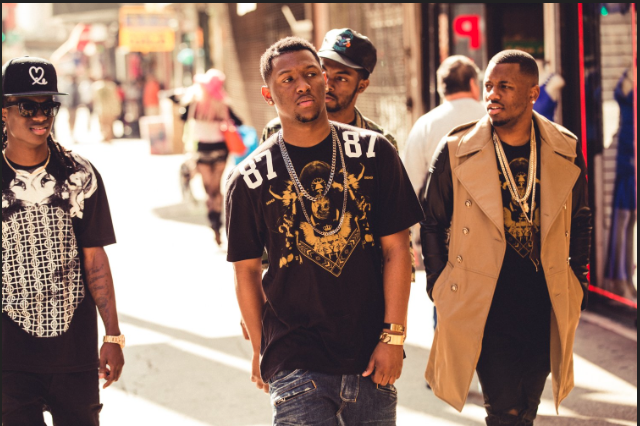