Attack on Titan 2, known in Europe as A.O.T. 2, is an action hack and slash video game based on Hajime Isayama’s manga series of the same name released for Nintendo Switch, PlayStation 4, and PlayStation Vita, Xbox One and Microsoft Windows. The game continues off where the previous title, Attack on Titan, left off, adapting further volumes of the Attack on Titan manga. The game features cell-shaded graphics and features the player defeating the titular titans in large, open areas. Key new features over the first title include a story-mode that’s entirely playable co-op, as well as a character creator. Wikipedia®. 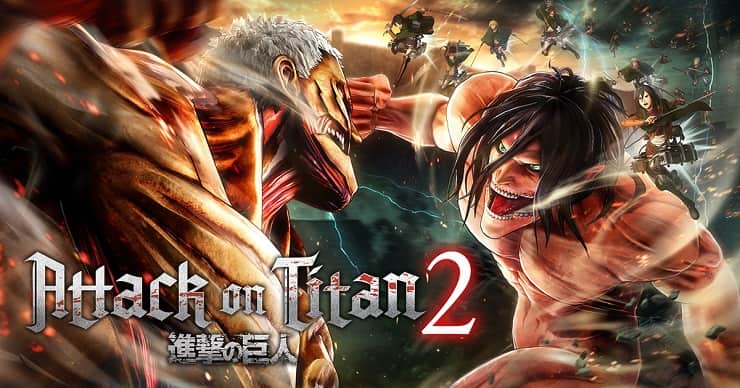 The player will also have the option to create their own custom character of either gender. There are a variety of faces and hairstyles to choose from, and sliders to adjust height and facial features. Furthermore, the player can customize the color of their character’s outfit, with individual articles of clothing being adjusted independently of each other. After character creation, the character is dropped in game to face Keith Sadies as their military instructor. The player can choose from multiple dialogue options when speaking with him. Custom characters will be able to play through stories from both Season 1 and Season 2 of the anime. Abandon all fear. Attack on Titan 2 is the gripping sequel to the action game based on the worldwide hit anime series “Attack on Titan.” Experience the immense story of the anime alongside Eren and his companions, as they fight to save humanity from the threat of the deadly human devouring Titans. Try your hand in operating the omni-directional mobility gear, maneuvering and flying through the sky to counter the Titans, and feel the thrill and satisfaction of battling giant opponents. The latest title in the “Attack on Titan” series is available for Windows! Players engage in battle in the world of “Attack on Titan” from the perspective of a single soldier. Experience the most extreme and evolved Titan-hunting action yet!