Assassin’s Creed IV: Black Flag is a 2013 historical action-adventure open world video game developed by Ubisoft Montreal and published by Ubisoft. It is the sixth major installment in the Assassin’s Creed series, a sequel to 2012’s Assassin’s Creed III modern story and a prequel to its historical storyline. It was released worldwide for the PlayStation 3 and Xbox 360 on October 29, 2013. The PlayStation 4 and Xbox One versions were also in development, and both versions have been announced as a launch title for both consoles. The Wii U version was delayed in Europe until November 22, 2013. A Microsoft Windows version was announced for release on October 29, 2013, but has since been delayed “a few weeks,” and will be released on November 19, 2013 in North America and November 22, 2013 in Europe. The game will feature three main cities; Havana, Kingston, and Nassau, Bahamas, which reside under Spanish, British and pirate influence, respectively. The game will also feature 50 other ‘unique’ locations to explore, with a 60/40 balance between land and naval exploration. Assassin’s Creed IV will have a more open world feel, with missions similar to those found in Assassin’s Creed, as well as fewer restrictions for the player. The world opens up sooner in the game, as opposed to Assassin’s Creed III, which had very scripted missions and did not give players freedom to explore until the game was well into its first act. The player will encounter jungles, forts, ruins and small villages and the world is being built to allow players much more freedom, such as allowing players to engage, board, and capture passing ships and swimming to nearby beaches in a seamless fashion. In addition, the hunting system has been retained from Assassin’s Creed III, allowing the player to hunt on land, and fish in the water. Wikipedia®. 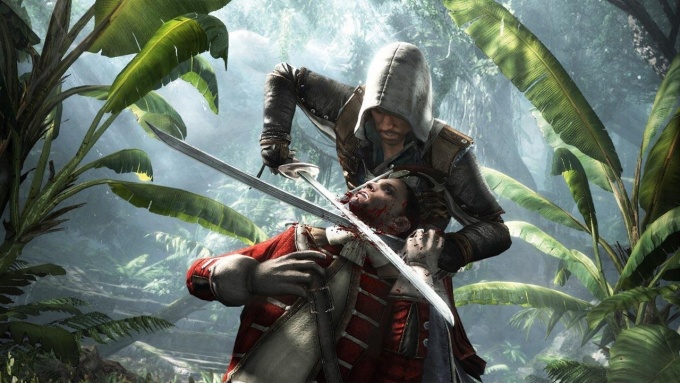