Off the back of a grandiose artistic showcase at St Pancras Old Church, London-based alternative electronic four-piece Archivist return with ‘Same High’, the elevating single lifted from their second EP, ‘Memo’. Following on from the critically acclaimed self-titled debut EP, which saw support from Noisey, Dummy, The 405, Q Magazine and more; the release of ‘Same High’ marks a strong return for the multi-instrumentalists Edward Begley and Rory Simmons, who are now surrounded by a wealth of heavyweight talent in the full line up of Archivist. This expansive group consists of lead singer and pianist Ed Begley; guitarist and Guardian freelancer Rory Simmons, who’s played live for Blur, Friendly Fires and Bat For Lashes; bassist Tom Mason, who’s recently been performing with classical sitar-player Anoushka Shankar, Questlove and Ghostpoet; and drummer Peter Ibbetson, who’s performed with the likes of Rosie Lowe and Valerie June. The union of these like-minded musicians yields a sound with sufficient pop sensibility and a definitive indie flare – with its glistening synths, cascading drum beats, evocative falsetto vocals and slick production. Speaking on lyrics and the meaning behind the track Ed explains how “Same High is about leveling with someone and enjoying the present moment”. 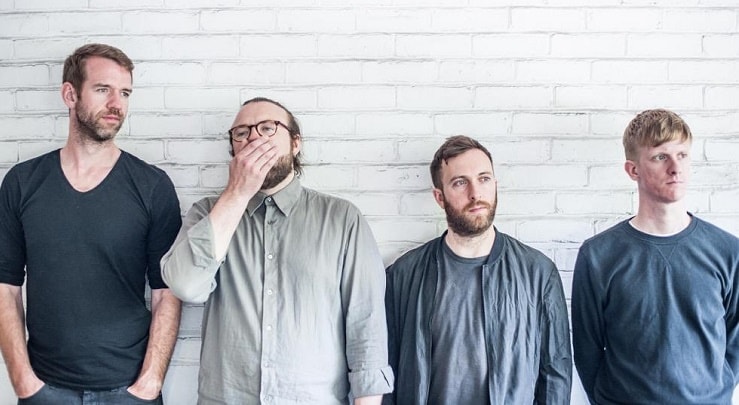 In support of the ‘Memo’ EP the innovative four-piece collaborated with avant-garde designer Max Pevsner to portray an important symbiosis between their music and contemporary art. Pevsner; who’s currently working on a project with Massive Attack, created colour-rich artwork inspired by the light spectrum. The concept explained by Ed, “ostensibly seems digital, yet on closer inspection is totally analogue”; which is reflective of the band’s hybrid sound and illustrates “their mix of timeless vocals and jazz elements melded with modern, electronic production” (Noisey).

Renowned Brixton-based artist and designer Wakako Kishimoto also jumped onboard to transpose the ‘Memo’ visual concept onto their set design, creating a coherent live aesthetic for the group on stage. These artistic partnerships combined to produce a truly multi-sensory experience at St Pancras Old Church, where Archivist were joined by Tom Herbert (The Invisible) for a guest DJ set. With the forthcoming EP, expected to drop before the end of the year, already receiving recognition from Tom Robinson and Don Letts at BBC 6 Music, the new single will no doubt see Archivist swiftly elevated to the next level and becoming a force to be reckoned with in 2017.