“Never in our lifetimes have we seen the levels of social bitterness and division we’re seeing now. Economics has failed the masses, world leaders are at each other’s throats and globalism is cracking. Everywhere you look there is tension. We’ve always believed music should stand for something and carry a message. There’s a lot to shout about in the world today, and we’ve got a lot to say.” AKIVA – Alongside the anticipated touchstones of pop music excellence – the Stones, Krautrock, Madchester, psychedelia, the rhythmic lyricism of Alex Turner and Courtney Barnett – AKIVA are happy to acknowledge cultural references less readily associated with rock’n’roll, namely UK current affairs programmes Newsnight and Question Time, and the trusty BBC Radio 4. For here is a band who believe that music is a medium for a message, never more so than in these troubled times. “Our songs tend to have a heavy theme of conflict and aggression running through them lyrically,” says frontman Dave MacKenzie. “Grab a beat, a bassline, add a view of the world and you’re on the right track.” 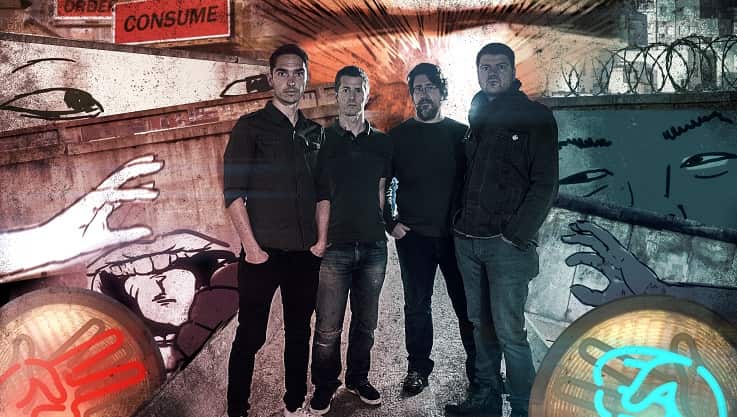 Three quarters of Akiva – Malcolm Carter (guitar, vox), Rob Mercel (bass) and Dave Mercel (drums) – have known each other since their schooldays at a Bedfordshire comprehensive, variously soaking up the delights of warehouse raves, classic guitar riffery and grunge. Singer, guitarist and synth programmer Dave MacKenzie then arrived from England’s northwest, bringing with him a passion for breakbeat, the Madchester scene and anything with a bit of groove and swagger. Honing their art in a dingy south London rehearsal room, AKIVA found themselves sharing the studio space with Kasabian, whose processed beats and retro licks weren’t a million miles away from where AKIVA themselves were heading. Throw in shuffling broken drum beats, rolling basslines, twinkling analogue synths and punchy, percussive lyrics and you have the AKIVA sound, fully formed.

Those lyrics, of course, have political intent. George Orwell is a band hero, and his writings informed much of AKIVA’s first album, ‘Can’t Buy Revolutions’, as well as previous single ‘M.O.D.’, which garnered a series of enthused reviews. Themes of war, conflict and turmoil remain prevalent in the quartet’s output and, sadly, there’s no end of material to draw on in 2018. “We’re generally fascinated and a bit terrified at the current state of the world,” says Dave, “and how it resembles the periods running up to the two world wars in terms of huge inequality, segregation and racial tension, and politicians using people’s fears and financial insecurities to whip up a culture of division, mistrust and discrimination.” AKIVA have an internationalist message to spread, one that reacts against fear and division. And you know what they say about rebellion informing the best art…

“This track drives at the heart of the decision makers in positions of power, who take lethal decisions with little care of the consequences. Arms deals, corruption, dictators and Orwellian never-ending wars of propaganda stoked the fires for ‘Ammunition’.” Dave MacKenzie, AKIVA

Produced by Jake Gordon (Skepta, J Hus, Everything Everything), ‘Ammunition’ is AKIVA’s full-blooded roar of defiance, set to a king-sized independent-rock backdrop. It opens with a slick, hypnotic bass-and-drums groove that flowers into a widescreen assault of big guitar lines, horn-like melodic stabs and, unforgettably, that angry yet anthemic vocal. From frontman Dave MacKenzie’s opening “Pay Attention, Pay Attention” salvo through to memorably prophetic lines such as “Before you know it we’ll be arming both sides”, it soon becomes crystal clear that AKIVA have written an important song, full of passion and satirical observation to underscore the fast-shifting, global crisis of our time. And it’s a fantastic rock’n’roll record to boot.

Following the success of the official promo to previous track ‘M.O.D.’, AKIVA returned to brilliant Berlin-based animator Wayne McCauslin to create a sophisticated, absorbing video accompaniment to ‘Ammunition’. McCauslin actually worked on his creation while in Vietnam, where war museums and local tales helped to conjure the imagery that works so effectively with the track. And if you’re fortunate enough to see AKIVA live this summer, you’ll see how the band incorporate the video into their intense performances.