“The first time we drove into New York we were all crammed in a tiny rental car. We came out of the Lincoln Tunnel and ‘You Will Leave a Mark’ was playing on the radio,” A Silent Film vocalist/pianist Robert Stevenson says, recalling hearing his group’s career-opening single scoring a powerful moment of its inaugural 2010 U.S. tour. The Oxford quartet had just released its debut of epic and ambiently anthemic indie rock, The City That Sleeps, on Bieler Bros. Records, a Florida-based indie with an incongruously niche heavy rock profile. Despite the curious association, A Silent Film had an impressive American welcome. The group became the longest charting band on Sirius XM’s Alt 18 Countdown, shifted 200K downloads as iTunes’ Discovery Download, and sold 75K digital singles. “Never in my dreams could I imagine the songs I wrote in my bedroom as someone else’s soundtrack to the skyline of New York City. It was only three and a half minutes but it opened my eyes to the greater possibilities of sharing our music,” Robert says. The American tour was a transformative experience for A Silent Film and the group decided to relocate to Arizona and record their sophomore album in the rustic environs of the West. The band’s latest, Sand & Snow, to be released June 5th, 2012 is a snapshot of the fevered creativity inspired by an impulsive tryst with Americana. “Jack Kerouac and Bob Dylan are massive inspirations to me. I felt like I always had a kinship with America; as soon as I could experience it, and I didn’t have to read it in a book anymore, I needed it for writing,” Robert says of the creative necessity of the move. “Previously I had written everything in Oxford, but as soon as I saw America, it changed my process; I wanted to live and breathe it.” In addition to Robert Stevenson, A Silent Film is rounded out by Karl Bareham (guitar), Ali Hussain (bass) and Spencer Walker (drums). A Silent Film formed in 2005 and has garnered favorable comparisons to Coldplay, The Killers, and Snow Patrol. Its new offering is aligned with its formative poetic and expansive pop-rock aesthetic but there is a freshly confident depth and distinction evident in the writing. Sand & Snow is searchingly hopeful with emotive hooks and romantically purposeful lyrics.

A Silent Film – This Stage is Your Life

The band self-produced this time in its new Arizona homespun rehearsal studio. The resulting production treatment is refreshingly contrasting with textural nuanced atmospherics boldly balanced by an earthy candor. “Some of the vocals we recorded outside in the desert because we could. We dragged the cables out into a dry river bed and just let outside noises come out in the recording. I remember this noisy owl silhouetted in a tree. A producer wouldn’t have it, and that makes things becomes mechanical,” Robert says. Mix engineer Alan Moulder – best known for his work with The Killers, Death Cab For Cutie, The Yeah Yeah Yeahs and Foo Fighters – tied the seemingly incongruous approaches together with a mix that favors theatrical dynamics using the Arizona ambience as scene-setting flavor. A Silent Film had a 5 year history with a highly respectable alternative radio campaign and an impressive tour itinerary, highlighted by jaunts with One Republic and Civil Twilight, The Temper Trap, Smashing Pumpkins, Athlete and Sleigh Bells, but the band found itself when it found America. Sand & Snow documents the wisdom and romance gleaned from self-discovery from band with proven songwriting chops and buzzing career potential. “Our story got started when we got on a plane and came to America in 2010, we felt like we had something to offer America,” Robert says. “We felt defined by the music we made.”

A Silent Film – This Stage is Your Life Lyrics:
Actors under stage lights,
Housewives pleading for romance
Shadows in a looking glass,
Are we off the script now?

When every eye is on you,
You’re breaching the banks of the levee
Just say it once more with meaning
And you’ll be bringing the house down

Addicted to an art
Of curtain calls, costume and make-up
Just say it once more with meaning
And you’ll be bringing the house down 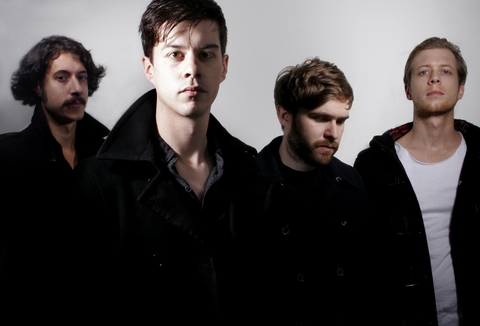