Violent Soho is a band from Brisbane, Queensland. The band formed in 2004. They are a quartet, with Luke Boerdam on guitar/vocals, James Tidswell on guitar/vocals, Luke Henery on bass and Michael Richards on drums. Their sound has been often identified as sounding very 1990s influenced, citing bands such as The Pixies, Mudhoney and Nirvana as heavy influences. In April of 2013, the band revealed via their Facebook account that they were in the process of recording their next full-length album. In July 2013 Violent Soho announced via Facebook that their next album HUNGRY GHOST will be released on the 6th of September 2013, with the first single, “In The Aisle”, being released on the 8th of July 2013. Wikipedia®.

It was a process of figuring out what we did like,” Luke explains, “rather than concentrating on what we used to do. We’ve changed and grown as people, so the music we were writing needed to reflect that. Whatever excited us, those are the songs that we went with.” The band had rediscovered that passion and energy. Following the release double A-side ‘Neighbour Neighbour’ and ‘Tinderbox’ in late 2011, the band spent six weeks in Brisbane studio The Shed, working with producer Bryce Moorhead, “one of the greatest, most underrated producers in Australia, I think. He’s like Brisbane’s Steve Albini,” says Luke. What emerged on Hungry Ghost was a character study of the personalities and ideas of consumer society that inform their hometown of Brisbane suburb Mansfield, examining “the concept of the outsider, people who are a little bizarre and how they view the world.” Hungry Ghost is the album Violent Soho needed to make. Intelligent, melodic, and dripping with attitude, it’s also a record you need to hear. 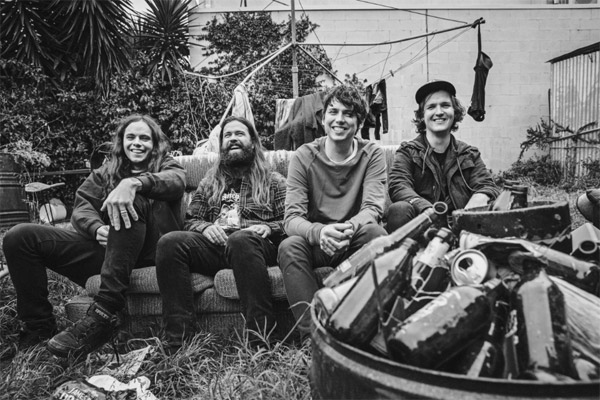