Fourth corner. Physically, it’s where four states in the U.S. come together at one singular point. Symbolically, it’s where the four great rivers in China come together as one. Or, it could be the cycle of life during the four seasons of the year. For Trixie Whitley, it’s a metaphor for trying to find balance and belonging from the songs that make up her scintillating debut album, Fourth Corner. Whitley burst into public consciousness in 2011 as the lead singer of Black Dub, super-producer Daniel Lanois’ (U2, Bob Dylan) project, blowing people away with a voice and presence beyond her now-25 years. And it’s that voice: an emotional, blues-drenched instrument that ranges from a lilting slap to a knock-you-backwards uppercut. On Fourth Corner, Whitley explores the range of human emotion in another set of four: utter love, total rage, unadulterated happiness, and crippling loneliness. “It’s those elements of life I keep coming back to,” she says. “Both as a person and musically as well.” 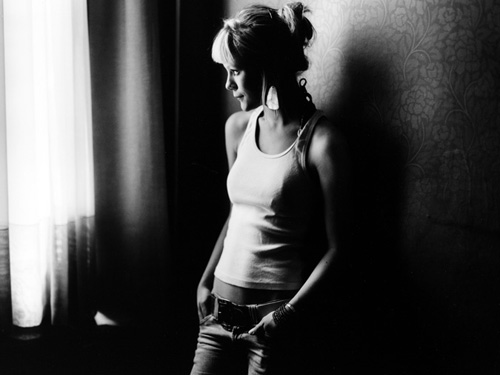 Recorded in New York with producer/keyboardist Thomas Bartlett (aka Doveman, who’s also worked with Glen Hansard, Antony and the Johnsons, Grizzly Bear and the National) engineer Pat Dillett (David Byrne, St. Vincent, Mary J. Blige), and string arrangements by Rob Moose (Antony, Bon Iver), aching songs like “Need Your Love” have Whitley working from a spare beginning that explodes into a blossom dripping with pleading vocals and delicate piano. On tracks like the sassy “Irene” and the sinister “Hotel No Name,” Whitley lays down a snarling guitar line on top of scuzzy beats while her voice veers from defiant to remorseful.