The Witcher 2 – Assassins of Kings is an action role-playing hack and slash video game developed by Polish studio CD Projekt RED for Microsoft Windows, Xbox 360 and OS X. It is a sequel to the 2007 video game The Witcher, and was released internationally on May 17, 2011, for Microsoft Windows and on April 17, 2012, for Xbox 360. Like its predecessor, the game is based on the book series of the same name by Polish author Andrzej Sapkowski. The game has been a critical and commercial success selling more than 1.7 million units for the PC and Xbox 360 as of May 2012. The gameplay of The Witcher 2 on the PC takes a marked departure from that of its predecessor as movement is solely through the keyboard and combat moves from the rhythmic mini-game style of the original game to a more fast paced style. The left mouse button is used for fast but weak attacks and the right mouse button for slower but more damaging ones. The ability to lay traps and also to aim and throw ranged weapons was added to the combat system. Geralt also has an improved offensive and defensive arsenal, with a wide range of melee and ranged weapons, armor, bombs, traps, and secondary weapons such as hatchets and shovels. Upgrades are divided into four distinct paths: Training, which includes generalized upgrades for various abilities and must be invested in before the others can be started; Swordsmanship, which improves Geralt’s sword fighting abilities; Alchemy, which includes perks such as reducing the negative effects of potions; and Magic, which increases the potency of Witcher Signs. The Witcher 2 also sees the inclusion of a stealth mode in certain parts of the game, where the player must remain undetected as they make their way to a certain objective. Players have the option of stunning enemies if Geralt manages to get behind them, however the player may choose to take a less subtle approach and simply engage the guards in combat. Several new mini-games were introduced including fist fighting, arm wrestling and a modified version of dice poker. Wikipedia®. 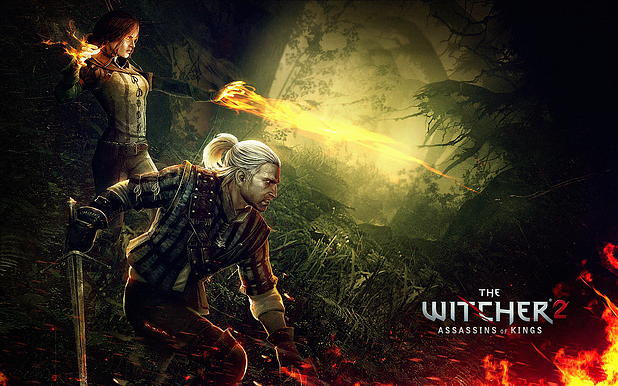