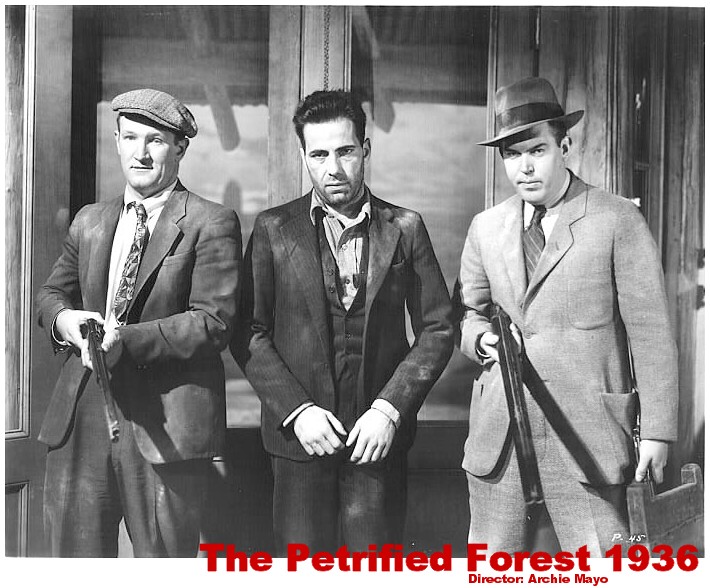 The Petrified Forest is a 1936 American film, starring Leslie Howard, Bette Davis, and Humphrey Bogart. A precursor of film noir, it was adapted from Robert E. Sherwood’s stage play of the same name. The screenplay was written by Delmer Daves and Charles Kenyon, and adaptations were later performed on radio and television as well. Wikipedia®

This heartfelt drama about a gangster on the run is the film for which Humphrey Bogart first received wide-scale recognition. Bogie and costar Leslie Howard were both brought on board after appearing in the successful stage play by Pulitzer prize-winner Robert E. Sherwood. Director Archie Mayo follows the original closely to create a fast-paced and gripping suspense drama with existential motifs. Leslie Howard plays a perfect gentleman–a lonely intellectual in search of meaning. When he lands in a deserted café, he finds what he’s looking for in the form of young Bette Davis, whose character yearns for the artistic climate of gay Paris. But both Howard and Davis are in for a bumpy ride when dangerous gangster played by Bogart takes over, holding up the joint at gunpoint. The small group of hostages take turns telling their tales, fearing death, while Bogie plots to reunite with his gang and his girl.