The Old Adage is the Pizza of American Music. Sure to delight most. With their very plea-sable yet complicated melodic lines, heavy synthesizer based, beat driven songs, you get a 10 topper fusion between the 80’s, Today’s Top Alternative, Electronic, Pop, & Trap. Vocals comparable to the modern day wails of Haley Williams (Paramore), & the Classic high pitched range of Ann Wilson (Heart). Guitar Riffs deliciously mirroring Jack White, U2, & Heavy Metal combined, and riveting drum samples sure to appease the modern day hoodlum. Not to mention the direct line of decent. Lead Vocalist Mimi Chavez is blood sister to Guitarist/Vocalist Nino Chavez. Harmonies, and vocal dubs are a must accentuating the family ties between the two. Retro meets new age, ugly meets, drop-dead-gorgeous, and heavy meets pop. It is hard to Imagine a two piece that can rock as hard as the White Stripes & the two are nothing short. Literally.” 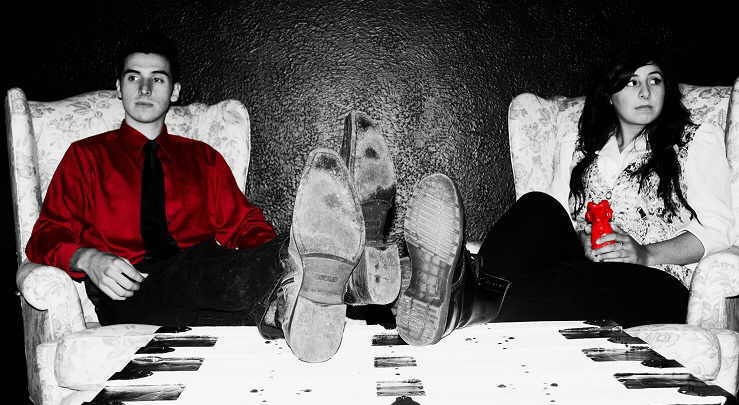 Brother & Sister fronted group founded in March of 2012. Growing up in a family of musicians there wasn’t much of a choice for the two. During grade school the Chavez’s were forced against their will to take up a music based course yearly. Hence being thrown into the field, their love for music began to grow and in the summer of 2008 came the siblings first compositions. The Chavez’s continued to write throughout the years, partook in battle of the bands, talent shows, and played at local cafe’s as the band “CHAVEZ”. In later years the group took on the name “Mimi & Nino’. Mimi & Nino was the “Civil Wars” phase for the two. Quickly the band was evolving to an “acoustic rock.” Stepping into a new phase and adding member James Humason, the group decided to take on a new name that included the three. “The Old Adage”. The Old Adage released their first demo the ‘T.O.A.D.’ in November of 2012. The TOAD consisted of acoustic rock original pieces. Again, the group would be evolving, this time to an “Electric feel” with synthesizer/drum machine based songs. Co-writers & Composers (Chavez’s), recorded and produced their first ‘Official’ release ‘MATCHES E.P.’ released August 2014.

The Old Adage: Red Lyrics:
White walls and empty room
It’s a pleasure to meet you
It looks like we can paint it all again
A girl with youth and flowers in her hair
Can we take the stairs
Down to the room where the walls ain’t bare
Or should we take the elevator
When we’re done here so we can paint more later

We’re planted where we bloom
We do not have to stay
Uplift these roots
If fears hold me in place
I’d rather move
We can forget it all.