The Kubricks are a 7-piece Ska-Pop band from London. Having developed an electric and hyperactive live set over the last few years, The Kubricks began putting on their own nights, ‘Skallywags’, at the famous Dublin Castle, Camden, before catching the attention of popular UK festivals (Wickerman, Brownstock, Fling). In the summer of 2013 they released their debut EP. ‘Wasters & Wannabes’ is the first record from the band and features five stonking Ska-infused tracks. Kicking off with the brash tale of modern day disaffected youth (‘Rash Behaviour’) before introducing, Charlie, the lovable local rogue that everyone knows (‘Skallywags’) along the way. Delivering infectious hit after hit, these well-sculpted songs showcase a real talent for witty tongue-in-cheek observations about modern living in London. The songs, conceived in London’s East End during the Olympic Summer of 2012, were then recorded under the watchful eye of producer Andrew Tulloch (Robbie Williams, The Charlatans, Madness) at The Blue Studio, London. With influences spanning the greats of British Ska mixed in with Jazz, Rock, Northern Soul & Pop, ‘Wasters & Wannabes’ is an absolute must for fans of Ska, Rock & Pop. 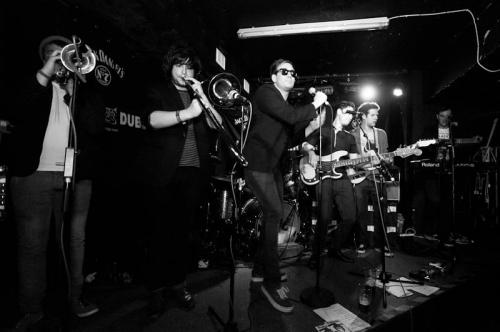