Talisco – Follow me. Forget about the guide, its shortcuts, its tendency to go the popular route. Talisco has opted for new musical territory, digging deeper into electro-folk experiments, always searching for more. We had met him somewhere between the lowlands of Americana and downtown folk rock, through his first EP My Home. Since then, the mysterious dark-haired artist and his angel voice have added a few cases to the six- chord guitar and quite a few miles to the meter. His first album, Run, illustrates an escape, the unavoidable departure when you get into a routine, that urge to get away. The mad rush of a sensitive soul. In this new road-trip, the parisian songwriter travels through somptuous sets, that never ending land which he loves to put into music. No need to go for a caved exile, Talisco locked himself in his own home studio to give life to this collection of imaginary tales. On paper, he goes for ellipes and metaphores; as for the sound, it has to be raggety: «I love the raw sounds of the Fender Telecaster». He immediately adds that the weapon doesn’t really matter: « in the studio, I like to twist the sounds, manipulate them and put them through different compressors and old pre-amps, I mess around with them, try to work them to create my own sound canvases », the musical alchemist says enthusiastically. It’s there, in the middle of the jacks, the microphones and the electro-Legos, on his multi-channel workbench, that he has refined his musical nuggets, far from the ready-to-bake recipes and formatted speeches:«What’s the use in conceptualizing the music? My country is imaginary, dreamy and lyrical». No logo. 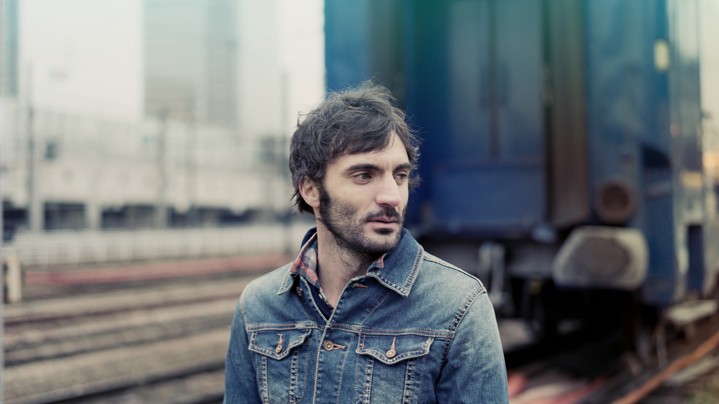 Run could be a collection of pictures. Talisco walks through the great spaces, its silences and hypnotic mid-tempos, before letting the chords, the beats and the vocals explode when the city lights finally prevail. Talisco is running, through the lacy western lowlands and the California deserts which he pierces with electrical cracks and vintage reverbs. The songwriter jumps from one train to the other, just as he does with musical genres. He looks to other horizons, like British rock (« Bring me back »), nurturing « the wide gap between the contemplative mood of tracks such as the ballad « So old » – I like to float over the fray, put some distance to observe what is going to happen – and dark melancholic atmospheres ». This is the chiaroscuro of an enlightened artist, somewhere between the molotov cocktails of a garage band and the soaring lyricism of Jeff Buckley. That would be enough to have Tarantino lerk around for his next original soundtrack on burger-obsessed hitmen or vintage car loving lady killers. To summarize, he could illustrate any kind of cinematographic alien. True electro rock anthem, « The keys » could be the soundtrack to the second part of Larry Clark’s «Kids», the folk volute «Lovely» could illustrate Sean Penn’s «Into the wild». Finally, in « Reborn », we even catch a glimpse of that « tricky romantic » (as quoted by Les Inrocks) on the stage of an unlikely suburban theatre, throwing his own piano and guitar pop corn to the audience.

Run, live, turn up the sound. One track after the other, we look at the shots. Inspired by the cinema, the author – a big fan of Tim Burton’s «Sleepy Hollow» and David Lynch’s «Mulholland drive» – draws up storyboards. And through these surprising musical short films, we are left longing for a wild ride.