Los Angeles-based collective Salt Petal is invigorating audiences and critics alike with a tropical surf-dance sound in a category all its own. A cross-border combination of Argentinian folk, Brazilian tropicalia, cumbia and up tempo surf rock blurs ethnic and musical boundaries, bringing to mind Blondie, Os Mutantes, Gal Costa, and 60′s rock and roll. The band’s sound is one of the freshest to come out of Los Angeles, showcasing deep South American rhythms with vibrant indie pop harmonies and textures. 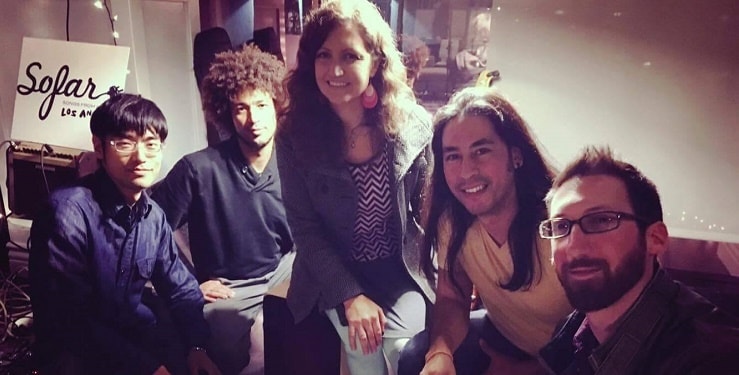 Founding members, Autumn Harrison and Rodrigo Gonzalez started the band after a trip to Buenos Aires, where their late night singalong sessions turned into the beginning of their first record. After performing in small cafes and receiving positive responses from musician friends, they began to play bigger stages and soon became one of the most sought after festival bands in Los Angeles. Salt Petal has played high profile venues and festivals such as SXSW, Los Angeles Times’ Festival of Books, Echo Park Rising, Chinatown Summer Nights and Make Music Pasadena, performing alongside well-known artists including Lila Downs, Grimes, Robert DeLong, We Are Scientists, La Santa Cecilia, Chicano Batman, members of Blondie, Jane’s Addiction and more. Not only have their videos been featured on MTV Tr3s and the band written up in Billboard, but they recently won an international songwriting competition voted on by representatives of the BBC. The musical collective has also performed a special in-studio for Seattle’s acclaimed NPR station KEXP, broadcasted internationally. Salt Petal’s latest release, Rare Hearts was recorded at the famed London Bridge Studios in Seattle with producer Eric Lilavois (Saint Motel, Atlas Genius) and mixed and mastered by Raymond Richards (Local Natives, Avid Dancer). The album aims to be a constant reminder for humanity to have faith and love in ourselves, in order to continue to get through difficult moments. The central theme is “exploring the fight everyday against yourself to be able to see what you have around you” reveals Harrison.

Their sound is heavily influenced by the adventuresome explorations of South America’s music revolutions in the 60s and 70s, such as Tropicalia, Gonzalez confides,”Tropicalia had such a great philosophy of taking things on, consuming and devouring what was available and experimenting with it in a boundary-less way, in the search of a new identity.” Salt Petal aspires to do the same, with their new release Rare Hearts. They write from loving a variety of sounds found in California, with rhythms and sounds from across the Americas considered on equal footing with rock, soul, and blues. The musical collective describes their sound as subconscious and a natural extension of who they are and hope that Rare Hearts will inspire people to be passionate, courageous and of course to dance! Leading single ‘Telephone’ is a mixing pot of surf rock and 60’s psych, a dance anthem for the millennium. While the single ‘Disco Rats’, successfully showcases Salt Petal’s diverse musical sound. Rare Hearts features heavy trombone, funky bass lines and surf rock guitar riffs, paired with Harrison’s vocals creating a colorful and vibrant musical journey.