The trendy thing in R&B/Soul is to be emo, with slickly overproduced songs heavy with dark, coarse, moody, and often, quite frankly, depressing lyrics over synthetic sounds. We’re informed that somehow this malnourishment is “keeping it real.” In truth, sometimes what’s keeping it the realest is a ray of un-ironic optimism, an unfaltering faith in love, a little bit of sun in an uninspiring day, the music of singer-songwriter Nola Adé. Adé is the antidote, the anti-drug to the melancholic bit of missed Prozac doses that now passes for depth. In the face of such self-congratulatory darkness, Adé dares to embrace her light. So, have Windy City audiences who’ve taken on her positivity challenge and encountered the shine of a full-bodied vocalist whose phrasing is Ella Fitzgerald, soulful timbre is Jazmine Sullivan, and eclectic style is all her own. This too is what Adé’s music and message to her eager fans is really all about: honoring the traditions of the past, being unafraid of the present, and unapologetically being oneself for a brighter future. No hipster posturing here, just the real. 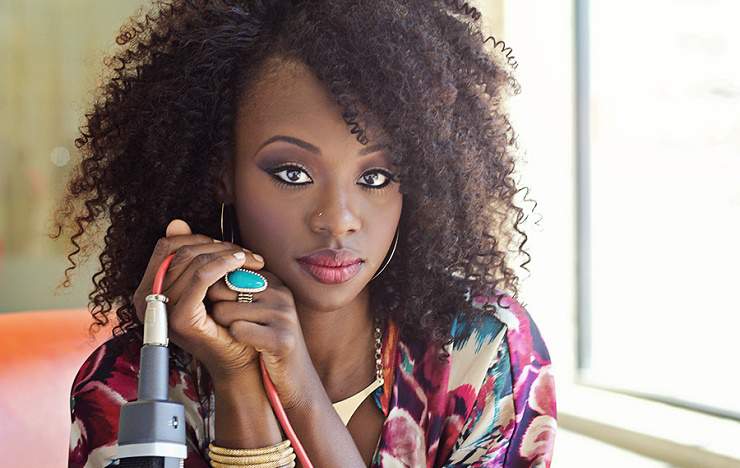 And how could this musical natural not be real? The first generation of her Nigerian American family to be born in the States, the Chicago, Illinois native is the embodiment of an immigrant spirit of hope and optimism, eagerly embracing the fresh opportunities presented by each brand new day. The infectious confidence and disciplined work ethic she was reared under by devoted parents are emblazoned on her rollicking melodies and in the fearless approach with which Nola Adé tackles the juggernaut of soul. Of course, it helps that Adé was surrounded from birth with music, from family who sung throughout the day and in church to the Chicago streets that birthed the likes of Chaka Khan, Curtis Mayfield, The Chi-Lites, Donny Hathaway, Dave Hollister, Jennifer Hudson and Kanye West. Accordingly, a diversity of musical flavors seeped into the musical consciousness of a young Adé, the Nigerian gospel and Afrobeat of her parents’ homeland, the smooth soul of classic Chicago radio, the jazz of Ella and Sarah on regular rotation on Adé’s childhood stereo, and the voice refinement of the St. Ailbe Choir where this Catholic schoolgirl received her early guidance in clarity and precision, vocal hallmarks that resonate still. The gospel training rounding out Adé’s unique instrument would come with the University of Illinois Black Chorus, while her signature style was divined under the private training of The National Academy of Recording Arts and Sciences renowned vocal coach, Lyndia Johnson.

However, the road to a musical commitment was not a straight line. Upon graduating from college, Adé entered law school, eventually becoming a legal intern at Russell Simmons’ Rush Communications in New York. While in the Big Apple paying her professional dues by day, Adé was also paying her musical dues at night, performing every Sunday at the open mic of the Village Underground. Once she returned to Chicago, the law student still found time to perform background vocals with acts like The Ones and The Alpha Clef Project at spots like the Elbo Room, Hard Rock Café, and The Double Door. Gigs with the Wishing Well cover band and solo performances at The Shrine, The Promontory, The Throne Room, The Velvet Lounge and City Winery Chicago, further honed her skills and built an audience through innovative takes on modern classics like Amy Winehouse’s “Valerie” and Chrisette Michele’s “Love is You,” as well as Adé originals like “Love.” The buzzing attention eventually earned Adé opening slots for shows with national recording artists like Bilal and Avery*Sunshine. Now a freshly minted entertainment lawyer, Nola Adé has finally landed on her destination, fully committing to this thing called soul with her exciting indie debut of The Love Dance EP.

An accomplished songwriter and storyteller who crafts melodies on keys, Nola Adé took a collaborative approach to the development of the intricate movements of The Love Dance EP. Produced by Brandon “B-Simms” Simmons, partially co-written with arranger/composer Larry Brown Jr., and boasting all front and backing vocals by the chanteuse herself, Adé’s seven-song introduction is about the natural ebbs and flows and intimate tensions of a serious relationship’s love dance. Whether about the eager newness of love’s first blush on the jazzy single, “Love,” or the sheepishly awestruck spirit that possesses one infatuated with the ease and “Cool” of a fresh lover, these songs shimmer with joy and an indomitable belief in love’s power to transform and overtake the soul. On this musically dynamic and unpredictable material, reverberations of Asa, Sarah Vaughn, and even Kim Burrell can be heard in Adé’s gospel jazz take on these secular soul pop jams. While it’s in vogue to be cynical toward the loving and uplifting, and profane sexuality has replaced healing songs about real emotions experienced by real people seeking something more, something true and lasting, Nola Adé is the wonder drug we’ve all been waiting for. The Love Dance is her cure. Won’t you step-out and get a musical dose of this soul smile?