It’s almost shocking on first listen. “Oh, to be a young man again,” croons Nadine Shah in her undisguised Tyne & Wear accent, the keening of her darkly rich and soulful, thrillingly muscular voice as irrefusable as the pull of the tides in the coastal village where she grew up. “I was once a handsome brute; had models, had the lot,” she boasts, inhabiting ‘To Be A Young Man’ so completely that the convention of gender matching voice in song seems both unnecessary and utterly archaic. But it’s not only assuming the voice of a male character – an elderly regular she met in the east London pub where she wrote most of her 11-song set – that marks Shah’s full-length debut out as strikingly contemporary. Love Your Dum and Mad is also sonically invigorating, favouring lean structures, intriguing instrumentation and moody, textured atmospherics, plus 3-D production that works with Shah’s remarkable voice, rather than simply acts as a showcase for it. Her subject matter, too, is bracingly honest and often springs from personal experience, most affectingly on ‘Dreary Town’, which was the first song she ever wrote and deals with the suicide of a close friend several years ago. Like the sparse and haunted ‘Floating’, it addresses the terrible effect on so many young men of the secrecy, shame and social taboos surrounding mental ill health. A painting by Shah’s late friend, Matthew Stephens-Scott adorns the album cover, while its text provides the title – a play on “love your mum and dad”, with an implied ‘b’ completing the ruthlessly ignorant but tragically common “dumb” tag. “‘Dreary Town’ was essentially cathartic,” Shah explains, “and there was never really any intention when writing it that people would hear it, but once I finished it, I remember thinking that it would be okay. For a lot of what I talk about regarding mental health issues, a reference point is a poem by Philip Larkin called ‘Days’, which mentions ‘the priest and the doctor in their long coats, running over the fields’. It relates to my friends with mental health issues in that if you don’t adhere to a ‘normal’ structure of reality, then both religion and science will question you and label you. The subject matter of those songs is something I’m very passionate about.” Less painfully, the red-blooded and defiant ‘Runaway’ sees Shah assuming the character of a mother with an adulterous partner and the mesmerising ‘Filthy Game’ is a morally ambiguous fable of honesty challenged by desperation, while the sweetly romantic lyrics of the piano-led ‘All I Want’ express the pleasures of closeness and companionable silence. This distinctive set was co-written and produced by Ben Hillier (Blur, Elbow, The Horrors, Depeche Mode), who decided to join Shah after hearing ‘Dreary Town’. She met with various high-profile producers before fixing on Hillier, who’d shaped one of her favourite records – Blur’s Think Tank – and it was obvious the first time they met that their minds were artistically in tune. “Producers now are used more like glorified engineers, as opposed to great thinkers like they used to be,” reckons Shah. “I was very aware how much Ben could bring creatively to the album, and I do consider it a complete collaboration. Ben’s really innovative and the fact that his input was going to be more than that of any other producer was one of the things that really appealed to me about working with him.”

It was Hillier’s idea to record the second half of the album in Curtain Superstore, a commercial space in Blaydon, near Newcastle owned by Shah’s father. “The latter half of the record is more piano-based,” she explains, “so Ben wanted to put that into a different soundscape. We wanted to go on location to record that part of the album and we looked at lighthouses and warehouse spaces in London, but the costs were vast. The Blaydon warehouse was quite a basic set-up, really.” Musically, Love Your Dum and Mad draws from a deep well. There are echoes of the dramatic but controlled narrative blues of The Bad Seeds and PJ Harvey, of Scott Walker’s brooding experimentalism and the unapologetically raw expression of Marianne Faithfull circa Broken English, but also of the trance-like and desolate ghazals sung in Urdu by her Pakistani father, that Shah heard growing up. She listened to his music quite a lot after she left home, “especially for the vocal delivery. A lot of the technique is really unusual – like the way they will song over notes. There’s a hunger to ghazals and they’re hypnotic – usually eight or nine minutes long – and usually there’s a lot of repetition, which is something we use on the album. There are also quite a lot of jazzy elements.” Jazz has always been close to Shah’s heart. Her introduction came via a recording session she did as a teen of some gospel covers with “two wonderful guys” in their fifties, in an old studio in a mining village outside of Newcastle. Impressed by her vocal chops, they gave Shah more jazz- based songs to sing, such as Etta James’ ‘At Last’. So, aged just 17 and intent on becoming a professional jazz singer, she moved to London, where she developed her talent at the prestigious Pizza Express Jazz Club under the guidance of older, established musicians. “I think if I hadn’t had that experience, I wouldn’t have written my own compositions,” Shah considers. “I was singing from the Cole Porter songbook when I was there and one thing you’re very aware of is the judgment being passed on them, because of course, a lot of people do it. So, for the first time, I started thinking about the technicalities of singing, learning when to push and when to pull back at certain points, when to highlight… those were things I learned from the guys I was singing with. And I learned a lot from watching them play, too. It was all a really good discipline for my vocal.” Unsurprisingly, the young Shah abandoned her formative diva-pop influences the moment she first heard Nina Simone. “Because I had a big voice,” she admits, “I liked people whose songs I could sing loud, so I genuinely liked Mariah Carey and Whitney Houston. Nina Simone was different from anything else I’d ever heard and I was completely taken aback by her ‘Love Me Or Leave Me’. Her voice really resonated with me – it was almost ugly, in parts – and her delivery was so honest. Her subject matter set her apart from Billie Holiday and Ella Fitzgerald, too and her piano playing was fantastic. She was just so ballsy; when you read books written about her, her character shines through.” As does Shah’s, in the glowering and seductively intense songs that comprise Love Your Dum and Mad, although they’re in no way the expression of a tortured soul. There’s hope, empathy, solace and redemption here in spades. “I do understand it when people say my songs are dark and desolate,” she says, “but I’m aware of a whole bank of material out there by people like Diamanda Galas, who to me are like the real dark stuff. I don’t mind at all when people say my music is dark, but I do find it quite funny, because it’s so far removed from my character; it’s almost an in-joke in my head. I’m very much a glass half-full person.” 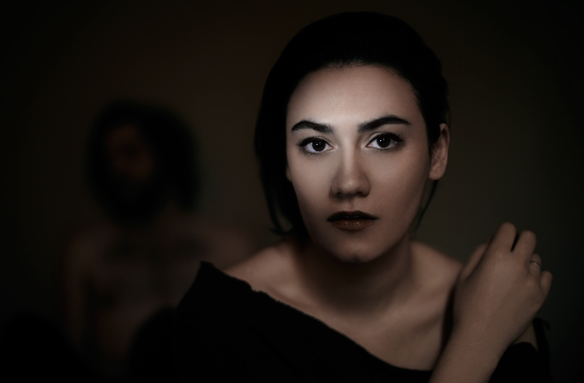