Michael Jablonka’s powerful 21st-century take on grungy alt-blues is proof that there’s still nothing to tingle the spine like raw, beautiful mastery of the electric six-string. His gifted, intricate guitar skills bely the no-frills anthemic intent of such rootsy singles as ‘Flump’, ‘Peacefully’ and ‘I Found You’ – all released by Lost In The Manor Records over the past 18 months to considerable clamour. Born and bred in the capital, Michael Jablonka has been gigging since the tender age of 14 as an in-demand guitarist for hire, including, over the past couple of years, touring arenas and festivals worldwide with fellow North Londoner and Brit-soul sensation Michael Kiwanuka. During this period, Jablonka decided it was time to blaze his own trail as a bandleader and songwriter, collating a set of intense yet universal rock’n’soul tunes. 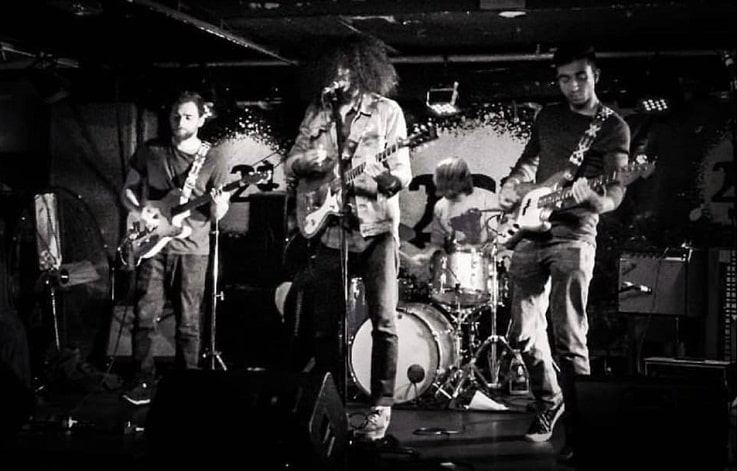 Two-thirds of the way into Michael Jablonka’s new single is a guitar solo so astonishing, during which the musician seemingly takes on the role of a high-velocity one-man philharmonic, that the subsequent breakdown serves as an essential space for the listener to get their breath back, especially considering the energy compacted into the previous two and a half minutes of song. By this point ‘Papier-mâché’ has already powered through its whip-crack rhythmic intro, the expansive soul beat of the verse and a melodious chorus, giving off a charge that could surely power a small town.

Lyrically, ‘Papier-mâché’ is something of a metaphor for an intangible idea, a thought that flounders on uncertainty. Michael explains: “Sometimes unconsciously an idea might snowball into an emotion that you’re afraid to confront. And ‘Papier-mâché’ for me is that structural object you can’t quite figure out, it’s fragile and easily falls apart if not taken care of.” But if the concept was born out of doubt, the resulting song is unequivocally confident – skilfully crafted alt-rock produced with characteristically dynamic zest by Eddie Al-Shakarchi (Boy Azooga, Imogen Heap, Palomino Party).

Michael Jablonka: Papier-mâché Lyrics:
Fallen hearts has severed all our strings,
Before you know it we’ve hit the ground,
Its not the distance in which I’m bound,
We’ve drifted out of misfortune,

Force myself to make amends,
Here you are my dear old friend,
These possessions underlie,
I cant decipher,

You want something,
That I don’t own,
Who knows someday, sometime,
We cant carry on,
Blind us from what we are,