K. Michelle – Maybe I Should Call. Kimberly Michelle Pate, better known by her stage name K. Michelle is an American recording artist, pianist, guitarist and songwriter. She first received notice in 2009 with the charting single “Fakin’ It” (featuring Missy Elliott), and later went on to release the follow-up singles: “Fallin’” and “I Just Can’t Do This”. In the summer of 2012, K. Michelle garnered further attention by appearing in the VH1 reality series Love & Hip Hop: Atlanta. Following her appearance on the show, she landed a contract deal with Warner Bros. Records. She released her long-delayed debut album Rebellious Soul on August 13, 2013. The album saw commercial success, debuting at number 2 on the Billboard 200 and selling 72,000 copies its first week. Wikipedia®. 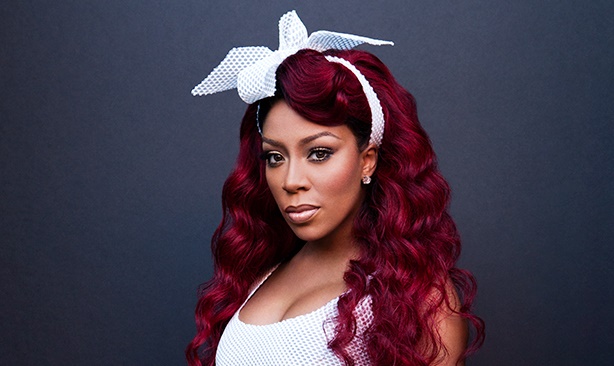 Being an artist is about fearlessly breaking the boundaries. K. Michelle takes pride in that part of her job. Her first full-length album, 2013’s Rebellious Soul [Atlantic Records], flipped the script for R&B and enjoyed staggering success in the process. Arriving at #1 on Billboard’s “Top R&B/Hip Hop Albums” chart and #2 on the Top 200, it made history as it became the highest Top 200 entry for a female R&B singer’s debut since 2001. In addition to yielding the hits “V.S.O.P.” and “Can’t Raise A Man”, the record spawned the Rebellious Soul Musical directed by Golden Globe-winning actor Idris Elba. She also solidified her place amongst music’s elite, garnering a Soul Train Award for “Best New Artist” and an NAACP Image Award for “Outstanding New Artist”. Still, when it came time to work on her sophomore effort #AWBAH, K. Michelle wanted to pave a new path once again. “I’m a very musical artist,” she declares. “This is a statement that I don’t let genres define what I sing or who I am. I wanted to merge everything I love into something exciting. That was my vision here.” Recording in Los Angeles with hit-makers including Pop & Oak [Britney Spears, Drake], Eric Hudson [Kanye West, Mary J. Blige], and Lil’ Ronnie [R. Kelly, Lupe Fiasco], she indeed turned to one of her earliest influences for inspiration.

K. Michelle – Maybe I Should Call

“I went back to my love for country music,” she admits. “My first voice teacher told my mom, ‘People will expect her to sing a certain kind of music, but I want her to try other things’. So, he got me to sing country and yodeling. It’s a big part of who I am. The first tape I ever got was The Judds’ Love Can Build a Bridge. I learned storytelling from that style, and my vocal runs definitely owe something to it.” The album’s first single “Love Em All” flaunts her artistic evolution and daring spirit. An exuberating production from Lil’ Ronnie, Shea Taylor, and B.A.M., she carries a stunning and striking melody that’s both powerful and provocative. There’s a distinct bombast to the track emblematic of her progression. “It’s a mix between R&B and rock,” she goes on. “It shows the diversity to come on the album. Lyrically, ‘Love Em All’ is about how I’m going to keep dating until I find the right man—and I’m going to love ‘em all. I love each of the guys I’ve dated for different reasons. One might be compassionate, while another might be tenacious. It’s all of those qualities.”

K. Michelle – Maybe I Should Call Lyrics:
Long distance in the way of what could be, even when your here you’re not wit me
She’s having the child as you do carry it
I’ll be dammed if you get married
House up there be how you ajust it
Ain’t gon’ work you got problems trusting
Let me know I’m supposed to be focused
But these nights are the coldest
Will you ever let it go? I don’t know
Will I ever be first? I hope
But I ain’t just sitting around
Can’t wait for someone who’s singing my words
Damn I can’t compete with a baby
Is there any room left in your heart for me?

Maybe that’s why I ain’t got a man
Cause I be too in too much thinking
Tryna compensate for your absence
But no drug can’t take where you
Try to know try just want you where I am
1000 of them just one him
Drowning in along my excuses
Hardest and him useless, probably should use it less

Will you ever let it go? I don’t know
Will I ever be first? I hope
But I ain’t just sitting around
Can’t wait for someone who’s singing my words
Damn I can’t compete with a baby
Is there any room left in your heart for me?

After the last time we talked
Oh I was a mess
You had me stressed, Oh no no no
I wrote a text, I didn’t send it
Dialed your number, but said forget it
Oh why would it change? she’s still in the way
But