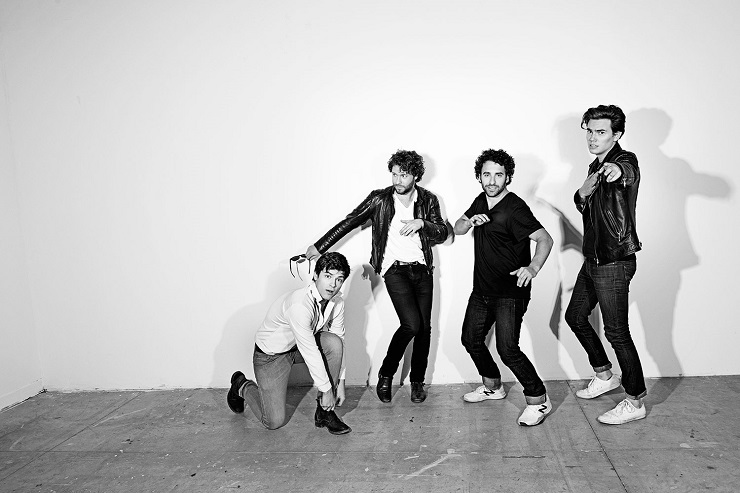 A bit over a month ago, “Coming On Strong” impressed with its confident sound, showing a variety of hook-y comparisons to my mind at least (“…the synth-tinged color of Cut Copy, the crisp punch of Hot Chip, and the infectious Brit-pop tribute tendency of acts like Dent May.”) With a suave electronic and funk component being prominent on the very rhythm-heavy “Coming On Strong”, it’s also worthwhile to find the band at its more guitar-centric, as is the case on the excellent “Cigarette Buzz”. Fuzzier and more rock-forward, it’s a fantastic rock anthem with a deliciously soaring chorus that’s hard not to catch a buzz from.

Ready to take off after years roving Toronto’s vibrant bar scene and touring great swaths of Canada, their third full-length album, Tunnel Visions, arrives as their most confident and mature effort to date. Produced by Blue Rodeo’s Greg Keelor and recorded at his remote farm in Southern Ontario, it’s comprised of songs about being on the road, about losing loved ones, about growing up and coming to grips with life.

Even while running the gamut of emotions and themes, the bandmates never lose the buoyant, hooky songwriting or soulful harmonies they’ve honed over nearly a decade of collaboration, and their hard-won chemistry is evident in how effortless the execution comes off. With Tunnel Visions, they offer an original take on a classic sound, with compositions that feel at once familiar and fresh. Their diverse array of sounds jumps across and often fuses genres – from folk to funk to stripped-down guitar rock, with synth-pop flourishes and splashes of grunge. These are plaintive songs and gritty songs, songs that strike a tonal balance between chip-on-the-shoulder tenacity and Sunday morning malaise, between small-town intimacy and big-city bravado.

The production, too, is polished to a sheen, with input from outside voices entering the picture for the first time. Lead single “Coming on Strong” is co-produced by The Darcys and features legendary singer/songwriter Jim Cuddy on backing vocals. The album, mixed by Chris Stringer and mastered by Joao Carvalho, showcases a sound that’s more layered and sonically rich than anything the band has created thus far. This is a long way from the Jane’s Party that recorded and self-produced their debut album in a garage in Toronto’s Jane and Finch neighbourhood.

Since then, they’ve collaborated and shared the stage with Blue Rodeo, Sam Roberts Band, The Arkells, Wintersleep, Matt Mays, The Maccabees, The Rural Alberta Advantage, Tom Odell, Lights, Manic Street Preachers, and others. They’ve come up in the world, and people are starting to take notice.

Two years in the making, Tunnel Visions speaks of a band that’s found itself, and of one of Toronto’s best-kept secrets stepping out of the shadows.
http://www.janesparty.com/bio/