Spike Jonze’s – Her (2013). “Her” is an upcoming science fiction romance film written and directed by Spike Jonze. The film centers on a man who falls in love with a computer system. It marks Jonze’s solo screenwriting debut and is expected to be released on November 20, 2013. Theodore (Joaquin Phoenix), a lonely writer, purchases a newly developed operating system designed to grant the user’s every command. To Theodore’s surprise, a romantic relationship develops between himself and the operating system. Wikipedia®.

“Spike Jonze’s – Her (2013)“. In the not so distant future, Theodore (Joaquin Phoenix), a lonely writer purchases a newly developed operating system designed to meet the user’s every needs. To Theodore’s surprise, a romantic relationship develops between him and his operating system. This unconventional love story blends science fiction and romance in a sweet tale that explores the nature of love and the ways that technology isolates and connects us all. Months back, there was a bit of confusion on the part of many, myself included, when it was thought that Her would be another teaming of Jonze and Charlie Kaufman. Now, although it most certainly is not and shouldn’t be thought of as such, I can’t help but get a strong vibe of the writer in what’s listed above. This is only meant in the best way possible, of course — right now, it’s just sort of “sticking out.” 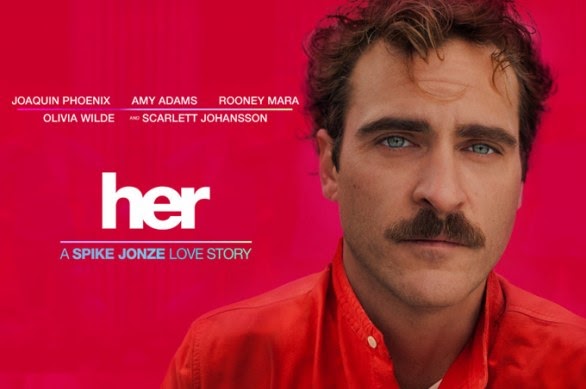 Joaquin Phoenix once again works with visionary director on a film that is the most unconventional film I will probably see this year. From the director of Being John Malkovich, Adaptation, and Where The Wild Things Are, director Spike Jonze writes as well as directs this love story between a depressed writer, and an artificial intelligence with the voice of Scarlett Johannson. The rest of the cast features two other female favorites: Rooney Mara, and Amy Adams. This is the first film in forever for Jonze and I am really looking forward to it.