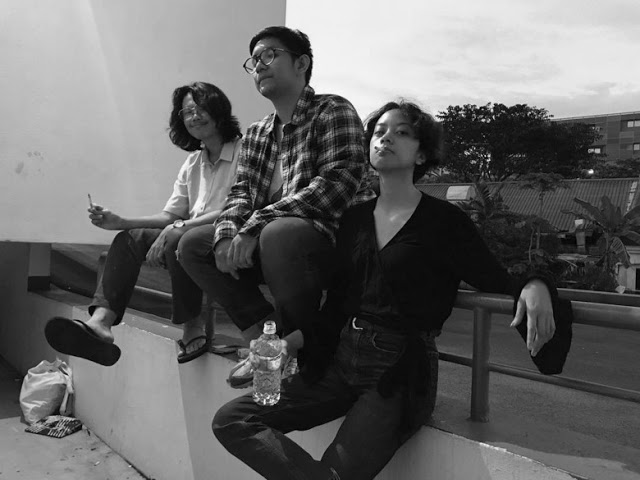 All songs by Grrrl Gang
Produced, Arranged and Performed by Grrrl Gang
except drums by Fakhryan Ardyanto and Bagus Rachmandityo
Track 1-3 and 9 mixed and recorded at Satrio Piningit Studio, Indonesia by Sasi Kirono
Track 4-8 recorded at Lahan Eross Studio, Indonesia by Tutoet Daru Prabowo, mixed by Ferry Kurniawan
Mastered by Matthew Barnhart at Chicago Mastering Services
Artwork illustrated and designed by Kevin Aldrianza
Everyone has been forming their band with people they go to school with since time immemorial, and Angeeta Sentana, Edo Alventa and Akbar Rumandung are no exceptions. Based in Yogyakarta, the trio gained serious indie-creds through the release of “Bathroom”, an indie pop anthem that makes the word “summertime” rather nostalgic than cliché and the song “Thrills” which is daring and straightforward, resembling themselves with female-fronted indie pop bands like Dum Dum Girls and Talulah Gosh. The instrumentation of the three might not feel new, but they enhance the pure pop pleasures through a catchy composition that is not overworked. Just something that we all been missing.
After the release of Stop This Madness singles, the band was invited to many local shows and released “Dream Grrrl” not long after, which rumoured to be included in their upcoming punkish debut EP.
https://kolibrirekords.com
https://www.facebook.com/grrrlgangband