Australian rock has a new voice – and new conscience – in Rhyece O’Neill, frontman of Sydney’s Greta Mob. O’Neill wrote produced, mixed and engineered the band’s debut album Let the Sunburnt Country Burn, a turbulent journey that starts with the uncompromising seven-minute slow burn ‘Yorta Yorta’. Formed by O’Neill and Luke Millar and now including Tim Korn, Adam Kennedy and Scattered Order’s Shane Fahey, Greta Mob take their name from “the motley band of Irish horse thieves that knocked about the Wangaratta district in the 1870s [and] formed the nucleus of an ill-fated Irish republican guerrilla army around the Kelly Gang.” The band’s roots are in Wangaratta, and ‘Yorta Yorta’ was written in part while O’Neill worked in the Myrrhee Valley, “not far from where Ned Kelly shot those coppers.” Matching that knowledge of our land’s history, the album introduces a fierce style of distinctly Australian songwriting that puts the band in the company of Hoodlum Shouts and before that Midnight Oil. Let The Sunburnt Country Burn was recorded in Berlin, Sydney and a shearing shed in Western NSW. Greta Mob are proudly DIY, funding the self-produced album with dead-end jobs and directing the clip for the dubbed-out single ‘The Petite Bourgeois Blues’ themselves. The band haven’t gone unannounced in recent months. Tex Perkins is a fan, inviting them to support both Beasts of Bourbon and his newer project The Ape, while Spencer P Jones called them the best band in Sydney.

Greta Mob – Gypsy Town Lyrics:
Our Mother she was a thief
They brought her here in chains
And when she was released
She stole that bread again

And here we have this motley mob
of vengeful punks aloud

From this Beast Mr Jones did fly
To join this mob who’s thunder…
Shattered the walls,
Kicked down the doors
And left the philistines to wonder:

Where on earth is this Gypsy Town?
To which this mob calls home?
Alas! Said the mob
‘The map exists in the the song!’
And it’s best heard out on the road.

Im goin’ down
To Gypsy Town
To see my Dad again 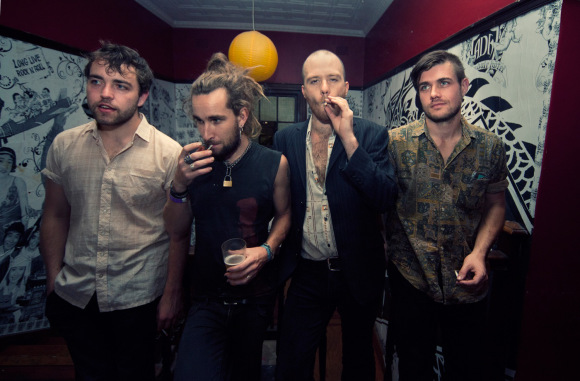