Formed in Montreal in 2009, Elephant Stone is the brainchild of vocalist, bassist, songwriter, and sitar player, Rishi Dhir. Also featuring Miles Dupire (drums/backing vox) and Gabriel Lambert (geetar/backing vox), Elephant Stone have toured extensively throughout North America and Europe and are prominent members of the burgeoning psych rock scene. Dhir has recorded, performed, and toured with indie rock icons (Beck), legendary cult bands (The Brian Jonestown Massacre), and contemporary psych titans (The Black Angels and The Horrors). Released in 2009 on Dhir’s own Elephants on Parade label, Elephant Stone’s debut album, The Seven Seas, was nominated for the 2009 Polaris Music Prize, which honors the best full-length Canadian album. Produced by Jace Lasek (The Besnard Lakes), the album introduced Elephant Stone’s innovative blend of rock ‘n’ roll, Hindustani classical music, and infectious pop on an album chockfull of memorable songs, such as “Bombs Bomb Away,” “How Long,” and “The Seven Seas.” The 2010 EP The Glass Box expanded on the spirited sounds of The Seven Seas. 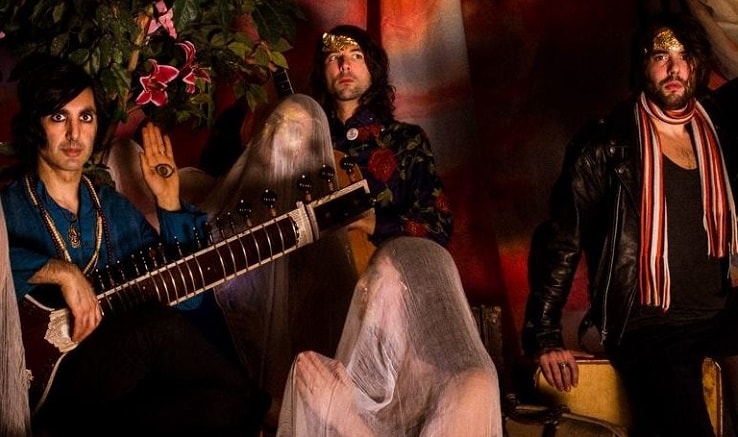 In 2013 Elephant Stone released their second full-length LP, Elephant Stone. The album received critical acclaim from NPR, Brooklyn Vegan, Consequence of Sound, and other important media outlets. It also contained Dhir’s finest batch of songs yet, especially the singles “Heavy Moon” and “Love the Sinner, Hate the Sin,” as well as the raga-drenched meditation, “A Silent Moment.” A third album – The Three Poisons – followed in 2014. Elephant Stone’s heaviest, grooviest, and most ambitious record to date, The Three Poisons yielded the band’s two biggest hits: “Knock You from Yr Mountain” and “Child of Nature (Om Namah Shivaya).” And the darkly compelling and inventive “Three Poisons” showcased Dhir’s lyrical exploration of Buddhist themes and The Tibetan Book of the Dead.

The Three Poisons remix album – ES3PRMX – appeared in 2015 as a digital download. Anton Newcombe of The Brian Jonestown Massacre, Tom Furse of The Horrors, Alex Maas of The Black Angels, Peter Holmström of The Dandy Warhols, and more contributed remixes. In 2016 Elephant Stone will release their fourth album, Ship of Fools. A single from the album – the ominous dance-psych freakout “The Devil’s Shelter” – features Maas on vocals and is already available as a digital download. — Paul Gleason (2016)

Elephant Stone: Andromeda Lyrics:
The void can seem so near
When you close your eyes and open up your mind
The stars they draw us in
To an outer plane and deep within
Andromeda
Our world can feel so small
As you gaze upon the furthest star
A burst of brilliant hues
With grains of sand in a magicians hand
Andromeda
Is she waiting there
Just for me to see
On this ship of fools
Like a drop in the sea
What can this mean to me
A 100 millions stars
Saw through the eye of a satellite
An island universe
From a naked mind on a moonlit night
Andromeda..