Crossing Souls is an action-adventure video game in development by Spain-based indie development studio Fourattic and published by Devolver Digital. Crossing Souls plays in 1945, where archeologist Dr. Carter Jones is sent by the U.S. government onto a secret mission to recover the Duat Stone, an artifact of mysterious, supernormal power, leading him to a forgotten tomb in the Valley of the Kings near Cairo, Egypt. Dr. Jones is able to get a hold of the stone, but disappears and is never found. Half a century later, in 1986, five teenage friends, Chris, Math, Charlie, Big Joe and Kevin, discover his corpse on a bicycle trip through the woods outside their quiet town in California, and with it also the Duat Stone. Taking the stone home and driven by curiosity, Math is able to build a device with which the friends are able to unlock and control the stone’s power. Though the friends do not fully understand the artifact’s power, they find out that it is able to make them see and interact with the spirits of the dead. However, their curiosity gets into the scope of former U.S. Army general Colonel Beringer, self-proclaimed Major Oh Russ, who had organized the Duat Stone’s recovery in 1945, and now wants to stop the friends to get deeper into the artifact’s power. While the five children go on an epic journey to uncover the secret behind the artifact and the spirits, that are made visible for them, Oh Russ threatens them and captures their parents and friends, to regain the Duat Stone himself and receive the power to control the deceased to accomplish his world invasion plan. Wikipedia®. 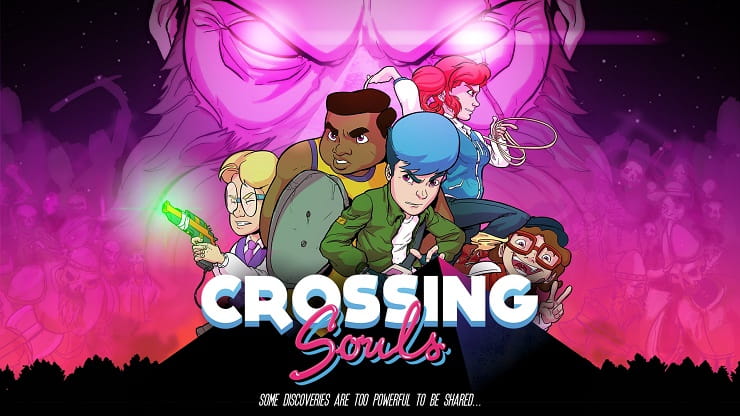 It’s 1986 in California. A group of friends discover a mysterious pink stone that allows to travel between two realms. This gang will live the summer of their lives in an adventure that will get them involved in a government conspiracy. Control five kids with special skills while fighting and solving puzzles in order to save their families and the world. Crossing Souls is an action-adventure set in a California suburb in the midst of a supernatural event that rocks the small community as grand forces siege the town. Control five characters: Chris, Matt, Charlie, Big Joe and Kevin, each one with their own skills and combat styles. Change characters on the fly and use each character’s specialties to overcome any obstacle and target your foe’s weaknesses. Fight in real-time, solve clever puzzles, face off against powerful bosses and play special levels inspired by 80’s arcade video games.