Civil Twilight brings a perfect blend of atmospheric sound and hazy storytelling that transports you to another place. Although Steven McKellar, his brother Andrew and Richard Wouters hail from South Africa, their sound is incredibly epic and their powerful song “Letters From The Sky” has provided the soundtrack to your every waking moment since its release. Written as an abstract concept by three lifelong friends, the song, along with their debut self-titled album, takes you to a time where it’s not quite daylight and not quite darkness. Civil Twilight provides a safe haven in their vast musical desert for you to seek refuge. Steven’s vocals come forth in an eerie falsetto that can only be described as a crosspollination of Jeff Buckley and Thom Yorke. Richard’s drums are pounding reminders that the drummer always bestows the missing piece of the musical puzzle while Andrew’s guitar is the perfect complement that rounds out Civil Twilight’s lush soundscape, haunting yet soothing at the same time. Cape Town’s not exactly the center of the musical universe; while their South African roots provided much inspiration, the band grew tired of their surroundings and soon relocated to Los Angeles. After a brief stint in LA, they decided to see what America had to offer and found a studio in South Carolina, where they recorded their first self-titled album but felt a need to experience something bigger. For their sophomore release they decided to settle in Nashville and found themselves enamored with the culture and people.

The writing process also shifted on Holy Weather (available March 27, 2012). The road is a strange beast; it can change how you perceive the world and moments that inspire you. Civil Twilight spent the better part of the last year on tour playing the likes of Bonnaroo and Voodoo Fest, opening for acts like Smashing Pumpkins and Florence & The Machine, and headlining their own shows across the country. When Steven started writing songs for their follow-up album, he used the most powerful tool at his disposal: nostalgia. When you’re constantly in motion, you can’t sit down and spend hours looking at something; you don’t have time to really absorb what you’re going through so you absorb subconsciously and write about it later as you reflect on it. There’s a difference between actually being in the moment, writing about it as it affects you, than when it’s flashing through your memory later on. This new approach to songwriting proved more challenging. However, all three members agreed that they wanted to craft an album that was a real test to play, not in terms of technique but in terms of exploring a longing that they hadn’t been able to discover on the previous record. Most of the songs are intangible to the listener. Every song is written from a different character’s perspective; Steven taps into fictional personae, inspired by real-life people he’s met and wonders how they’d adapt to certain situations. Put yourself into a Civil Twilight song and you’ll find yourself in a world where it’s not quite dark, yet not quite light, but exactly the place you want to be. 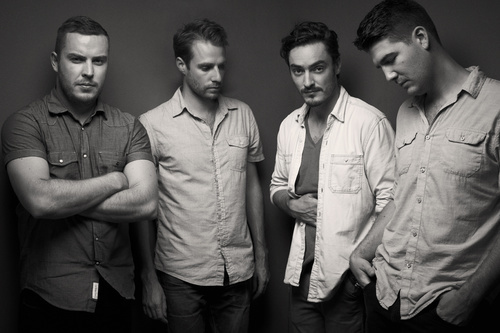