Lt. Colonel Matt Brennan (Humphrey Bogart), discharged from the military, runs a civilian flying school, where he is reunited with an old US Army Air Force buddy, Major Hinkle (James Brown). Brennan is offered a job at the Willis Aircraft Company as chief test pilot for an experimental high speed jet fighter known as the JA-3, designed by Carl Troxell (Richard Whorf). Troxell is also a link to Brennan’s past, having known him in the war when Brennan was a bomber pilot. A flashback to B-17 missions over Germany reveal Brennan to be a top-notch pilot. Another connection to his past is his former flame, Jo Holloway (Eleanor Parker), now Willis’ secretary. In order to prove the capabilities of the new JA-3, capable of speeds up to 1,400 mph (2,300 km/h), Brennan convinces Willis that a record-breaking flight from Nome, Alaska to Washington D.C., via the North Pole, will impress the government. At the same time, Troxell tries to develop a safer version of the revolutionary aircraft, the JA-4, equipped with an escape pod, but dies during a test flight. The earlier record flight is a success with Brennan earning a $30,000 paycheck, enough to marry Jo. Then he learns that Troxell has been killed. Despite his earlier reservations about the need for safety systems, Brennan takes another JA-4 out for the official government demonstrations, using the escape pod to prove that the new aircraft is safe. On landing, he falls into the arms of his beloved. Wikipedia® 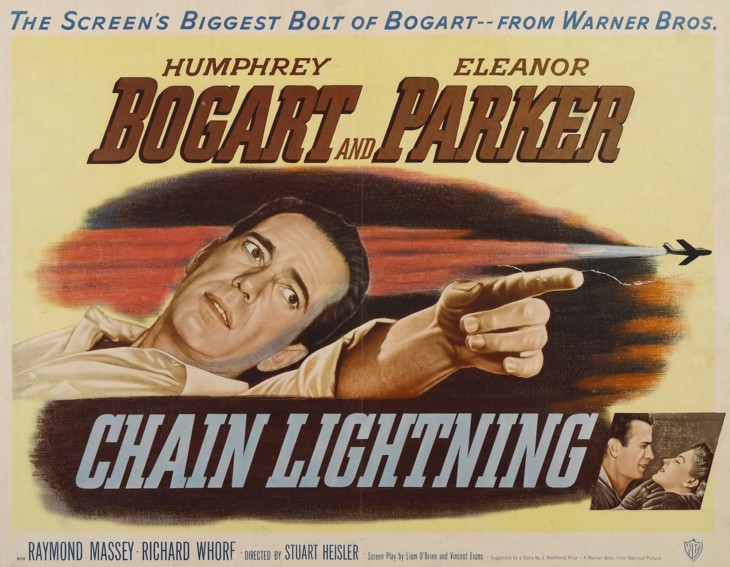 Chain Lightning is a 1950 American aviation film based on the story “These Many Years” by black-listed writer Lester Cole (under the pseudonym “J. Redmond Prior”); the screenplay was written by Liam O’Brien and Vincent B. Evans. During World War II, Evans had been the bombardier on the Boeing B-17 Flying Fortress Memphis Belle. The film stars Humphrey Bogart as a test pilot, Eleanor Parker and Raymond Massey. Cole’s credit on the film was officially restored by the Writers Guild of America in 1997, although the only screen versions have “suggested by a story by J. Raymond Prior” listed. Created in the postwar era to reflect the progress in aviation and aeronautics, it is a fictional account of a US company engaged in creating and producing high speed jet aircraft. Completed in early 1949, Chain Lightning was one of Bogart’s final Warner Bros. films, ending a 20-year association. Due to the appeal of the subject, the film was released in multiple versions for 11 different countries; in Germany, it was known as Des Teufels Pilot.

Plot: A World War II bomber pilot becomes a reckless barnstormer and finally, a daredevil test pilot. He attempts to reform his ways in order to win back his true love.