Candice Anitra hates boxes. Not in a weird, pygmachophobia way. It’s the rigidly corrugated musical categories that both perplex and perturb her. So much so that at times, Candice likens her musical existence to feeling like a stranger on earth. “Humans like for you to say what your identifying labels are,” she points out. “Once you do that, you have to stay in that category. If you do anything else, it confuses them.” Embodying the subtle rapture of Joan Armatrading, the robust confidence of Meshell Ndegeocello, and the thespian gender inquisition of Cheryl Dunye, the left-of-soul singer-songwriter has learned that it’s much easier to buck convention than to live a futile existence of the square peg in a round hole. “The thing I’m embracing and having the most fun with is that it’s ok to be the me that I’ve always been all along.” Hailing from a planet called Philadelphia, the Brooklyn-based songstress was reared in a musical family rooted in the glorious sounds of the local church choir. “Music was a big part of our household,” she says. “My father’s love of music and his writing music was something that was very special and important early on.” However, many years passed before the impetus to find her voice struck. “I always considered myself as an artist. By the time I was interested in singing, I asked my father to teach me. And he told me I wasn’t ready yet. For many years, I battled that comment.” 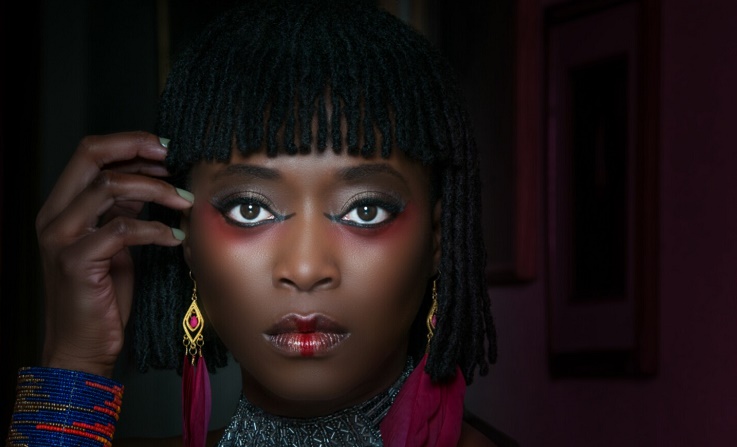 Candice set sail for New York University’s heralded Tisch School of the Arts after graduation and immersed herself in the fertile artistic environs of New York City. Enrolled in a self-scripting curriculum, Candice was molded into the image of a triple threat. But this did little to sort out her uncertainty about becoming a vocalist. “In school, it was tricky for me because I did a lot of things pretty well. But I felt like I had to pick one. I danced. I acted. I wanted to be a graphic designer. If I would have fallen in love with acting, I don’t know if I would have become a singer.” It wasn’t until she received accolades following a school performance that her confidence in her vocal prowess was bolstered. “I did one show as a singer and everybody was like, ‘Oh my God! I can’t believe you’re a singer!’ But to me, that was preposterous. Pretty soon, I had the reputation as the actress that could sing. And I liked that. It felt like a new persona.” Relishing the liberating new experience, Candice expanded her horizons and sharpened her talent as a writer with aplomb.

“I’ve always been a writer, so it was the perfect environment for me to flourish and try out things.” Yet she remained on the fence with regards to the strength of her vocal talents. “I didn’t think of myself as a singer. I thought I sounded ok. Obviously people didn’t mind listening to me. But it wasn’t something that I owned.” But her indecision would soon fade. In 2002, a post-collegiate Candice stumbled upon a musical outlet by assuming lead vocal duties for a local NYC band called True Story. The opportunity was an integral stepping-stone, presenting Candice with the empirical wherewithal to workshop a myriad of vocal styles and an individual musical aesthetic. “I wasn’t writing music yet. Musically, I hadn’t found my voice. I was still fleshing it out.” By 2006, Candice had written a Dali-esque stage play centered on black women entitled The Ripple Effect and had begun instructing a youth theater workshop. By that time, True Story had disbanded, but serendipity would find her crossing paths with a former classmate, which would prove to be her entry into the realm of songwriting.