Anno 2070 is a city-building and economic simulation game, with real-time strategy elements. It is the 5th game of the Anno series. It was released on 17 November 2011, and was co-developed by the German studios Related Designs and Ubisoft Blue Byte, and published by Ubisoft. Anno 2070 requires Uplay to operate. The scenario is set in the year 2070. Global warming has melted the Arctic ice cap, which has raised the global sea level so that the coasts were inundated. As a result, many old cities have vanished under the ocean, and much of what was once highland has been turned into chains of new islands. Responsibility for settling and exploiting these new frontiers is given to a select group of people, who captain mobile ocean-going bases known as Arks. The game has three factions: The Eden Initiative (referred to as the “Ecos”), Global Trust (referred to as the “Tycoons”), and the S.A.A.T. (referred to as the “Techs”). Ecos are environmental and build sustainable cities, but are inefficient and slow to expand. Tycoons are industrious and expand quickly, but have problems with pollution and dwindling resources. The Tech is a support faction available to the other two, and they are useful in researching the latest and most powerful technologies. The Techs are only available later in the game when you donate 10,000 credits to their cause. Wikipedia®. 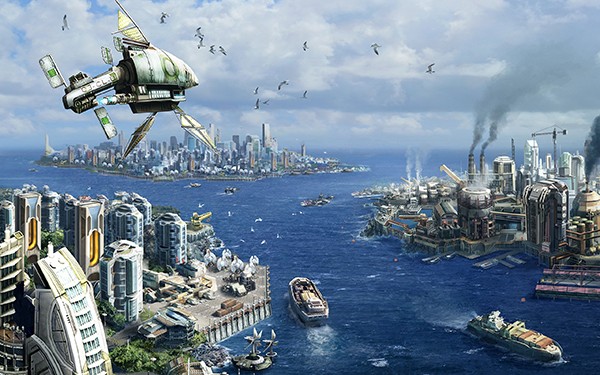