Anna Margaret Michelle Calvi (born 24 September 1980), known as Anna Calvi, is an English musician who plays in the band of the same name. On 6 December 2010, she was nominated for the BBC’s Sound of 2011 poll. Her debut album Anna Calvi was released in the UK on 17 January 2011, where it started at number 40 on 23 January. The album was nominated for the prestigious Mercury Music Prize in 2011. Calvi was also nominated for Best British Breakthrough at the 2012 BRIT Awards. She is known for her powerful voice, intense guitar playing and seductive live performances. Her second album, One Breath is due for release on 7 October 2013 through Domino Records. Wikipedia®.

Anna Calvi runs through the forest and the elements.

Calvi explained the song’s meaning to NME: “It’s about a woman I’ve seen who is beautiful, calm and serene. It’s about wishing you could just take your soul out and become that person; about getting to a point where you’re so stuck that you would be happy to forsake everything you are in order to become someone else.” Songfacts®

Anna Calvi – Eliza Lyrics:
The lonely won’t hold me for good
Peaceful is gleaming she stood
To see her, to be her, to change
As if like a kiss we’re the same
So hold me up, hold me up
If only I could be you

My sister, my pistol below
If you could know all that I know
I’m falling, no warning, no way
Tomorrow, tomorrow’s too late
So hold me up, hold me up
I know that I could be you 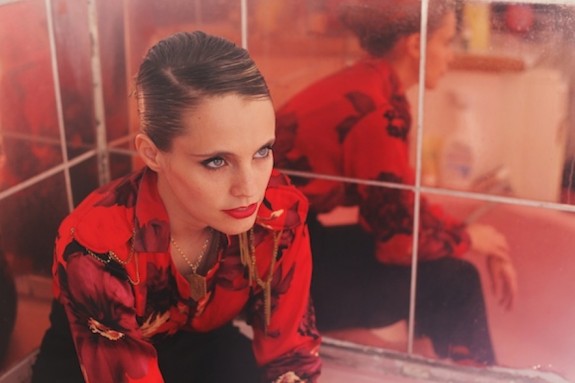