A Lot Like Birds is a post-hardcore band from Sacramento, CA, known for their tendency to flawlessly blend a wide array of genres; from ambient soundscapes to aggressive punk-fueled anthems to unpredictable prog-rock freakouts. The band was initially the brainchild of guitarist Michael Franzino. Franzino invited a couple Sacramento-based musicians and friends to perform with him, the result being Plan B, the band’s debut album. After solidifying a consistent lineup, the band started to pick up buzz in the Sacramento scene, with their dynamic and energetic live shows getting rave reviews. In early 2011, the band announced that Kurt Travis (formally of Dance Gavin Dance) would be joining the band as a second vocalist. Soon after, they signed to Doghouse Records (All American Rejects, Say Anything, The Get Up Kids) and acquired The Artery Foundation (Asking Alexandria, Dance Gavin Dance, Alesana) as management. After signing both deals, they entered Interlace Audio Recording Studio with producer / engineer Kris Crummet (Closure In Moscow, Fear Before, Dance Gavin Dance) to record their second full length, Conversation Piece. After it’s release in the fall of 2011, Conversation Piece received praise and they were called “one of post-hardcore’s most important new bands and one of the few capable of saving the scene.”

The open mouths of these rooms are connected
by a hallway, dark and narrow,
that we pass through like marrow through bone.
And we do it alone.

I miss the point and wish I still didn’t dream.
A taste gone mad, a sweet sadness, my favorite feeling.
The whispering walls sound like an endless corridor
and at this rate, all the paint is peeling off the walls.
And all I want to do is chase it (before it all falls apart)
down the hall made out of frozen faces.
Expressionless, eyes to the ground and lips locked tight,
ever so quiet, ever so quiet.
And I never choose to taste hallucinations of what I’ve seen.
Because I don’t see the difference between chasing ghosts in dreams
and chasing dreams in life.

Doll it up!
All the ones still close to us
are the ones that most of us
still don’t see. Still don’t see the way.
I would have thought that it could be the sympathetic solution,
disillusion.
And if I stayed or left would you notice more or less of my existence?
Out of the corner of my eye,
I see the ghost stutter-stepping like strobe lights,
ever-inching closer, but always out of reach.
So I hold my breath and keep it under my tongue
and wait until both of my lungs are filled.
If I count to ten, will it all go away?

Brushed aside or pushed aside?
A difference in tension,
intention and force applied.
Cast aside or passing by
people as canvases: blank outside and bleak inside.
We learned (and it caused other things asunder)
to stay (and avoiding all the turmoil)
out of the way of each other.
Just stay out of the way!

Always colliding with the things that we had tried hard to avoid
We just bury them, close our eyes, cover it up.
But what was buried managed to unlock the door
even though we had boarded them, nailed them shut, hid the keys.
Will we (in for it now) ever (board up the house) find happiness?!
Clarity?! Peace of mind?
Follow me down the hallway.
If I should take a fall, don’t look back.
Pick a door. Any door. Any door! NOW!

And now we sit in what was built on our dreams.
A space, now sad, speaks madness, attempts concealing
the crumbling walls.
It feels like our time is getting short.
And it’s too late cause all the paint is lying on the floor.
Did we selfishly erase it? (And we have all ignored the fault.)
Busy filling mirrors with our damn faces?
Circling flaws that we find without respite.
What do we find? What do we find?
And in the meantime,
All the vultures circle us in hopes to feed.
Because they don’t see the difference between
Death disguised as life and life with lifeless eyes. 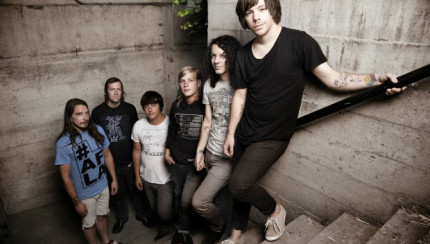