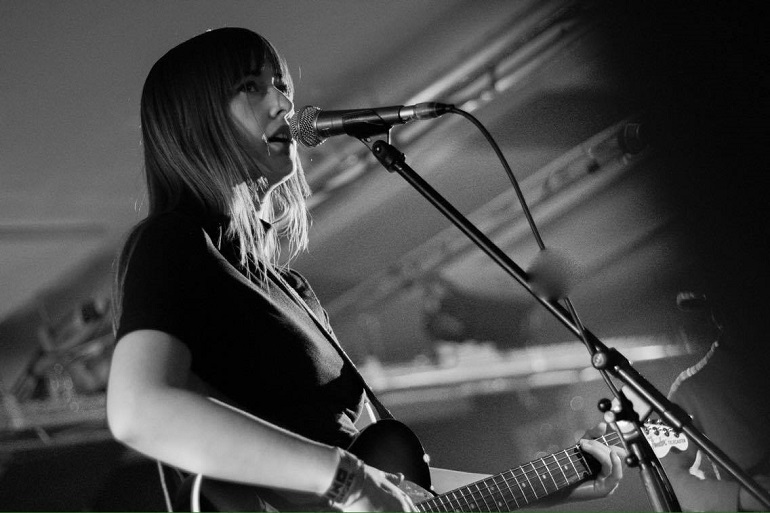 Cosmic Wink is out May 11th – nearly seven years to the day after playing her first solo show — another quiet synchronicity. “I don’t feel like I’ve made it,” she says. “I feel like I’ve opened the door and walked through it.” On the other side? Everything the light chooses to illuminate.

In 2016, after living in Austin on and off for a decade, she left her home state of Texas for California. Deeply inspired by the move to Los Angeles and the bliss of new love, she rented a back house from an actor friend who was away on a movie and started writing the songs that eventually became Cosmic Wink. As she wrote, her beloved dog Frankie began going gray with old age.

All three of these seemingly dissimilar streams intersected to give Cosmic Wink a unified sound and feel. The openness of LA — and confronting the downbeat nature of her older songs while performing to hushed European crowds — challenged her supposition that “heartache, depression, and sadness” were “the only way to make interesting music,” as she puts it.

“You’re asking a lot if you expect an audience to be completely silent during your set and listen to every word. I started thinking about performing as something that could be fun, and having a good time playing with a band live, making songs that could be relatable to all kinds of people. I want my mom and her friends to like this album as much as someone with super obscure taste — and I don’t think they’re mutually exclusive.”

Meanwhile, watching Frankie fade into old age gave her a new appreciation of the passage of time — and inspired the album’s opening song, “I See the White.” “I noticed the graying of the fur around her eyes,” Williamson says, “and I realized that she was a physical manifestation of the passing of time, and it was heartbreaking. It’s so easy to act like we have all the time in the world, to feel immortal or invincible.”

It’s that last realization that gives Cosmic Wink its paradoxically joyful center — the sense that time is slipping out of our grasp not only broke her heart, but also gave her a new sense of gratitude for the possibility inherent in the time she was afforded, and an attendant love for life and the people around her.

Throughout the album’s nine songs, Williamson’s love spills from her, readily, in poetic exhalations. “This love predates my name and my face and my age,” she sings in “Awakening, Baby.” “I can feel your heart / Or is it mine / Or is it ours?” She and her partner weave together in a kind of cosmic enmeshment — now they’re one person, now they’re two again — but she always sounds like an individual in possession of herself.

“When I left Austin and went to LA, I started to take my process more seriously,” she says. “I took my art more seriously. I didn’t have a normal job or a lot of friends when I first got to LA, so I just spent all day alone in that house writing. I got really into Carl Jung and working with my dreams. The title of the record is a reference to the Jungian concept of synchronicity and learning to live in a more magical way, looking for signs — which is maybe silly to some people, but it was working for me. And in a way, the record itself became a validation of the risks I was taking.”

Which isn’t to say that it came easy. Frankie died exactly one month before recording was set to begin. Williamson had decamped to Lockhart, TX, to write and rehearse with her band. Unable to work, she pasted a series of portraits on her wall — people she “wanted to think of as guardian angels,” as she puts it. Chan Marshall, Nina Simone, Townes Van Zandt, Patti Smith, and Leonard Cohen all served as icons. So did Frankie. And so did RF Shannon’s Shane Renfro — her bandmate of four years and the partner with whom she’d found herself so intertwined.

Her relationship with Renfro prompted a series of questions that she explores throughout Cosmic Wink, even as she marvels at the joy that love has brought her: “How much time do I have with this person? What’s going to happen after we die? Where will we go? Will you be there with me?”

She invited Renfro to collaborate on Cosmic Wink with her, as the producer. “It was the first time I was really willing to take a back seat to that process,” she says. “Shane and I had already been working together for so many years, and I wanted this album to be a marriage of our strengths.” Along with co-producer Dan Duszynski, Renfro slowly peels back Williamson’s songs, getting at their essence with a tender grace.

The music is appealingly swampy, occasionally static in ways that recalls Amen Dunes and the spectral spin of Alice Coltrane, until Williamson’s voice bursts through the circle in an ecstatic push. The songs unfold slowly, but her intimate delivery and the minute explorations of her band draw you into the details. She asks her subject to suspend their fixation on the passage of time in “Forever,” and she’s asking us to do so, too — come and get lost and see what you can see.

Cosmic Wink was recorded in Dripping Springs, TX, at Duszynski’s property, where the band lived, worked, and cooked meals together for a week, with occasional breaks for wildflower gathering and loops through the cedar-spotted woods. Working from an intuitive feeling that it would take her seven years to establish herself musically, Williamson released her first two albums on her own Brutal Honest label, and intended to do the same with Cosmic Wink before signing to Mexican Summer.
http://www.jesswilliamson.com/