Y’akoto has grown, not only musically, but also as a person. While her previous album was mainly defined by anger, sadness, defiance and cynicism, the helplessness that accompanies these feelings is transformed on “Moody Blues” to the urge for change.The fear of emotional injuries has given way to genuine care for the needs of her fellow human beings. The thoughtless focus on one’s self has made room for a sincere interest in the world’s problems. “Through real confrontation with life and people, I feel like I’ve come a little closer to myself. I could have chosen to be mentally isolated from everyone and everything, or I could have just leaned into life and rely or trust the people around me. I don’t want to be totally independent, I want to trust and love even if that makes me more vulnerable. Being more vulnerable makes me stronger.”

As the daughter of a Ghanaian father and a German mother, Jennifer Yaa Akoto was raised a cosmopolite from her infancy. She was born in Hamburg and grew up in Ghana with sojourns in Cameroun, Togo and Chad before finally ending up shuttling between Hamburg, Lomé and Paris, a wanderer between worlds, a modern-day nomad who has always drawn strength from a state of permanent transition, which she has always seen as the inexhaustible source of her inspiration. “The numerous relocations, all the travel, and the global adaptability this entailed – all these things strongly influenced me.” states Y’akoto. “Yet I feel no sense of displacement or inner conflict. On the contrary, it is all these stages of a journey, all the impressions and experiences en route, which together, form a sum that is greater than its parts – a greater whole – the sum of me, my totality.” And to be sure, this statement characterizes her career as an artist to date, which has turned out to be just as exhilarating and multifaceted as her eventful personal life. 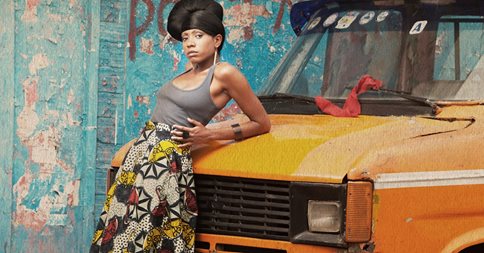