After cutting his teeth as the frontman of an angst-rock band for a few years, Tiny Eyes auteur Joel Evans met his partner (singer/songwriter Martha Bean) and found himself mellowing out. Feeling disconnected from the angst-ridden world of thrashing guitars his band drifted apart. It was around that time that he’d acquired an upright piano from the 1920’s. Taking to the instrument like a bird to flight, he quickly found a new musical voice and tonality that harmonised with his maturing tastes. Tiny Eyes is a one-man band from Leicester, a singer and producer who’s reared himself on the understated elegance of lovelorn balladeers from the twentieth and twenty-first centuries. By turns evoking Lennon, Tom Waits, Elliot Smith, Flaming Lips and Andy Schauf, Tiny Eyes is a brilliant and unique new sound. Last year, the release of his brilliant and original self-titled debut EP set out his MO clearly: he is a narrative songwriter in the classic sense, employing clever turns of phrase and vivid imagery to weave imaginatively fertile and provocative yarns into his music. 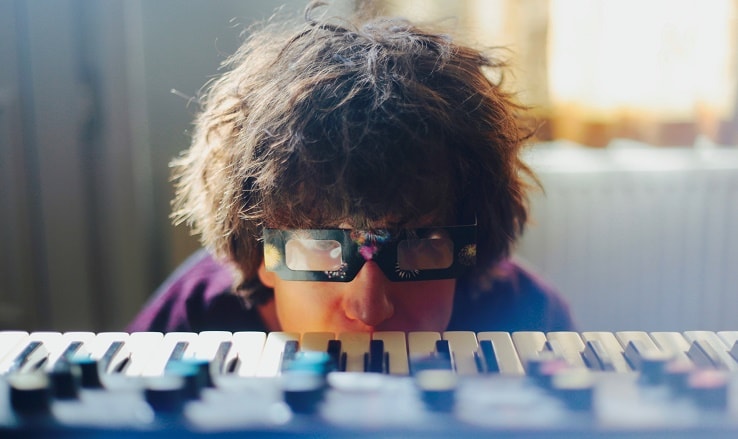 When your songwriting theme is love it can often feel like a road too well travelled. From the rose-tinted idealisation of new love, to the emotional tempest of love lost, we’ve heard the story retold in countless variations; we get the picture. Enter Tiny Eyes with his latest song ‘Just Saying’, the first single to be taken from his forthcoming debut album, released next year. ‘Just Saying’ is about the less documented side of our strongest emotion. It’s about the banal and the familiar, the quotidian journeys we go through with our lovers from sunrise to sunset, through mild annoyance to peaceable reconciliation, and then into bed again to repeat tomorrow. Featuring his partner Martha Bean on backing vocals, and made entirely at home on his trademark old 20’s piano with percussion patched together on a laptop, it’s a sonically adventurous ode to reality that endears itself to the listener through Tiny Eyes’ unique observational storytelling.

Tiny Eyes: Just Saying Lyrics:
I woke up with a dream still chasing after me
And the morning sky foretold of a catastrophe
Like an arrow in my eye
But hey don’t shoot me down now I was just saying