Say Sue Me are a surf-inspired indie rock quartet from Busan, South Korea. Friends since 5th grade Jae Young (Bass) and Kim Byungkyu (guitar) were introduced to drummer kang Semin and then they heard Sumi Choi’s speaking voice and decided she should be the singer. Sumi turned out to be a natural at songwriting and guitar. Formed in 2012, they released their 1st album [We’ve Sobered Up] in 2013 and EP [Big Summer Night] in 2014 on Korean Indie label Electric Muse. 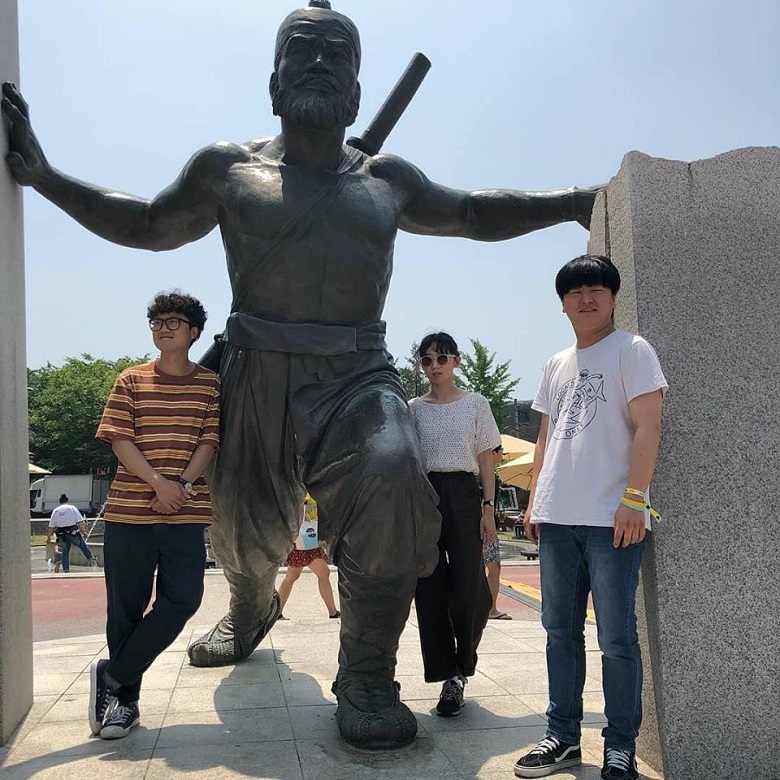 Christmas, It’s Not A Biggie
It is a carol song in surf and rockabilly style of the 50s ~ 60s. You can expect someone might have a hard time during this period because of the coldness of winter, and be sad and depressed about the passing of another year. Yet strangely most people during Christmas seem happy and warm. I want to think that Christmas is not a biggie, but for some reason I feel like I can be a better person during this time

Say Sue Me: Christmas, It’s Not A Biggie EP

In their own words:
“We can’t recall since when, but we had always thought that we wanted to make a Christmas record. It seems that the old bands had a Christmas album and we wanted to do something like that. The idea has been decided since around 2014, when we finished making our first album, ‘We’ve sobered up.’ Starting with sketches of ‘Out of Bed’ in 2014, ‘Christmas, It’s Not A Biggie’ in 2015, ‘Too Expensive Christmas Tree’ in 2016, and ‘After This Winter’ in 2017, we made this EP by collecting carols from every winter. We recorded with Hakju Chun, our Engineer at Mushroom Recording in Seoul, and it seemed that four different genres of music could be bundled into this project by his sound engineering that made good use of the features of Christmas albums. Christmas in Korea differs in that it is not necessarily a tradition per se, but does not seem to be very different from other countries. The street is full of people with rosy faces and people gather to spend time with everyone they love.”

About Say Sue Me:
Jaeyoung Ha (Bass) and Byungkyu Kim (guitar) have been friends since 5th grade. They met drummer Semin Kang and played in bands together since winter of 2012. On meeting Sumi Choi, they immediately offered her a spot as the vocalist in a new band that would become Say Sue Me. Sumi turned out to be a natural at song writing. Semin sadly suffered trauma from a fall during the making of their second album. New drummer Changwon Kim stands in while they await Semin’s recovery.
Following well-anticipated showcases at SXSW in 2018, they released sophomore album ‘Where We Were Together’ and a Record Store Day special covers EP ‘It’s Just A Short Walk!’ and the “Just Joking Around” single. Their blend of indie rock, dream pop and surf has been widely met with critical acclaim from the likes of Pitchfork, The Fader, Stereogum, NPR, BBC6Music KEXP, i-D, Dazed, ELLE and many more. The band toured the UK/Europe twice this year and have been anounced for SXSW2019.

Recent Press:
Pitchfork “…delicate, bruising music about indecision and loneliness (and lots of drinking).”
MTV “…your new favorite indie rock band from Korea!”
Billboard “Korean indie quartet Say Sue Me is on the up-and-up…”
NPR “…jangly indie-pop, handclap-rich girl-group classics and the lightly rumbling sounds of early surf-rock. At once stylish and timeless…”
Stereogum “…evokes late-album indie-rock epics such as Yo La Tengo’s “We’re An American Band” or Pavement’s “Fillmore Jive”…”
KEXP “…jangle-pop hooks, stunning vocal melodies, and intricate guitarwork that stands up proudly against some of their influences like Yo La Tengo and Pavement…”
The Fader “Really sweet, melodic rock that makes me feel like I’m in high school.”
Bandcamp Daily “…Nary a song on Say Sue Me isn’t a total ear worm.”