“People ask if we’re intimidated by the music industry,” says Henry Stansall with a laugh. “I think if they’d seen some of the gigs we’ve played, they wouldn’t be asking that question.” Along with younger sibling Rupert (22), Henry (23) has taken The Ruen Brothers from some of North Lincolnshire’s more insalubrious drinking dens to acclaim from tastemaking figures like Rick Rubin and Radio One’s Zane Lowe, Huw Stephens, Phil Taggart and Alice Levine. Good things have come easily to the Scunthorpe duo since their track, ‘Aces’, was posted online in January this year. And well it might, since the song’s marriage of Stones-y R&B with heart-stopping, Roy Orbison theatrics sounds remarkably fully formed in a band so young. Then again, Henry and Rupert have been playing this stuff for years – covers of hits by The Hollies, The Everly Brothers, Johnny Cash and The Beatles were mixed up with covers of more contemporary luminaries such as The White Stripes, Kings of Leon, Amy Winehouse and The Killers and were honed in bars full of “contractor blokes, who were all like 6ft 5 skinhead guys,” and scrap-happy punters. “We were playing Bobby Darin’s ‘Dream Lover’ in this pub,” says Henry, the band’s frontman. “I looked to the left and there’s this short guy strangling this really tall guy pressed against this frosted glass window, and I thought well, that’s cool as long as they don’t come in the pub. But of course, inevitably they come crashing through and there’s about six of them fighting, it’s a full-on brawl by this point.” Not every gig was like that, of course. But doing these shows was, as guitarist Rupert observes, an education for the band: “It helps you understand how great songs are written. You can’t be shit, otherwise you don’t get paid.”

Henry first started playing around the age of 10, Rupert when he was 8. Henry’s first guitar was a black Encore bought by his dad, Dene, whose own musical claim to fame was singing with The Sex Pistols after Johnny Rotten’s departure, on ‘The Great Rock ’N’ Roll Swindle’.” A high school performance of that band’s ‘Submission’ failed to set the world aflame, so Henry and Rupert set about the serious business of entertaining the thirsty music fans of Scunthorpe. Much as they enjoyed the opportunity to test their skills, the band lacked opportunities to try out their own songs, and in September they decided to make the move down to London. Shacking up in pokey bedsit digs in Finsbury Park Henry and Rupert decided that things would “come easier if you just get one or two things really right.” Accordingly, they got to work writing, recording and making the DIY video for ‘Aces’ that would put their careers firmly on track. After initial support from BBC Introducing, the song found its way onto BBC Radio 1, Radio 2, 6Music, XFM and Amazing Radio and Henry and Rupert’s phones lit up with calls from would-be managers. Despite all that – and tracks like ‘Hold Me Tight’ and ‘Walk Like A Man’ can only boost their chances of doing for early-60s beat music what Jake Bugg has recently done for skiffle – the boys are taking it all in their stride for now. “We sweated it out, we’ve done some of the roughest gigs,” says Henry. “I think growing up in a town like Scunthorpe, you don’t get influenced by any scenes, you just do what you enjoy and don’t worry about the rest. And I think that’s a healthy sort of upbringing.” 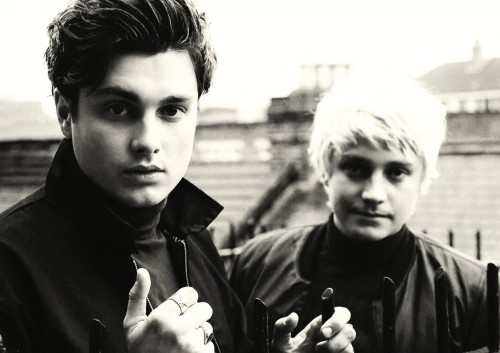