Pursuing their sonic manifesto “to use as few words and chords as possible”, London four-piece Moderate Rebels have followed their debut single ‘God Sent Us’ – a ‘Lamacq Livener’ frequently spun on BBC 6Music and Radio X – with a blistering five-track EP to be released on 2 June on Everyday Life Recordings. “We want to acknowledge the conditions of the era we find ourselves in and generate feelings of transcending them,” say the band. To this end, ‘Proxy’ was recorded in a small South Bermondsey studio while Moderate Rebels were reacting to stimuli including (but by no means limited to) Spacemen 3, La Dusseldorf, Kaitlyn Aurelia Smith, Roxy Music, Black Box Recorder, Jenny Hval, Death In Vegas and MGMT. 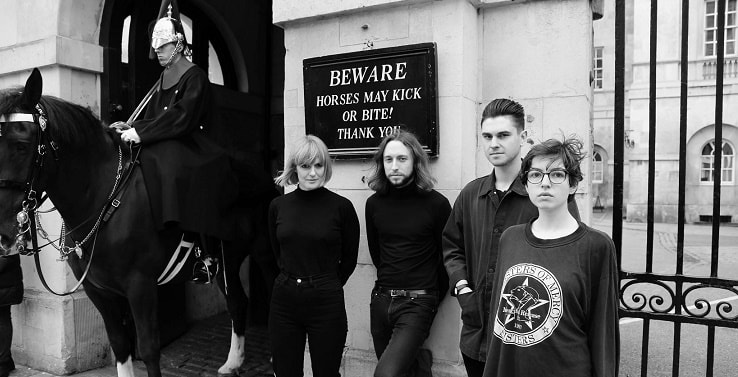 The resulting five tracks, each stamped with the quartet’s muscular hypnotic euphony, lend themselves to expansion and are being showcased at gigs via extended 15-minute versions (two per show). The second of these nights is at The Finsbury, Manor House, London on Saturday 3 June. Moderate Rebels are among the first wave of acts to be announced for Rockaway Beach at Butlin’s Bognor Regis next January, alongside the likes of Wild Beasts, The Orb and Honeyblood. The band are currently mixing their debut album, due for release in summer 2017.

Pulsing with all the energy of Moderate Rebels’ mesmeric live shows, ‘Liberate’ sets in motion a contagious riff that surges forwards while tributaries of guitar flow over, under and through pounding motorik rhythms and a precise, gloriously aloof, vocal. “What’s intriguing about the word ‘Liberate’ is how flexible it is,” say Moderate Rebels, a band striving to achieve their own version of liberation through this intoxicating new release.