Chicago has a rich tradition of breeding some of the most soulful and prolific singers, songwriters, and producers. From the times of Curtis Mayfield, Chaka Khan, Minnie Riperton, and Quincy Jones to the present day reign of Kanye West, Common, Lupe Fiasco, R Kelly, and No ID, the legacy has continued. There is a new addition to this elite class that many esteemed industry professionals already know about – Kaye Fox. Born in Charleston, SC, Kim Jefferson moved to the west side of Chicago at the age of four. As a young girl in church, she discovered she had a God-given gift to sing. Kim always felt she had an obligation to use her gift for a greater purpose. As she dug deeper into music, she found inspiration from some of the great songwriters such as Bob Marley, Marvin Gaye, & Stevie Wonder that communicated a message of social consciousness as well as love and life. A fan of Hip Hop as well, she found inspiration from Lauryn Hill, who fused many of these elements together in a ground breaking manner. Kim continued to develop her gift through adulthood by creating her own style of writing lyrics, melodies, and uniquely soulful harmonies. Kaye Fox the artist was born. Kaye quickly rose to become one of the elite artists of Chicago. She found a powerful creative chemistry in working with Grammy Award winning producer No ID (Artium/Def Jam), who at the time was already considered to be the godfather of Chicago Hip Hop from his classic work with Common and other artists. Together they built an incredible catalogue of music that made her a sought after commodity not only in Chicago, but all throughout the music industry. As a part of No ID’s production team, Kaye Fox has gained vocal credits on some of the last few year’s top albums from artists such as Kanye West, Rick Ross, Nas, Richard Ashcroft (The Verve), Big Sean, J Cole, & Common.

In 2014, Kaye Fox will begin to unveil the catalogue of music she has been building through a series of releases. The first EP, titled “Hear I Am”, will be released in April. The project is a masterful combination of R&B/Soul and Gospel influenced vocals, organic musicianship, and hard beats that promise energetic performances with her live band. Kaye’s songs are authentic, personal expressions. She has managed to make commercially viable music with genuine heart and soul. Her involvement in the project is comprehensive including songwriting, vocal arrangements, and co-producing the music. Kaye Fox is a rare breed of artist that is able to create visions of complete songs and bring them to life along with her production team. Welcome her to the legacy. 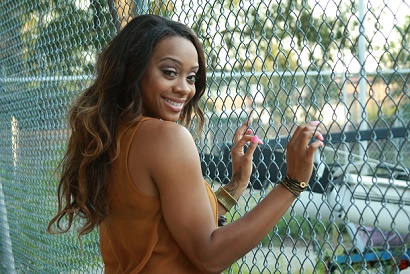