“Rio Bravo” is a 1959 American Western film directed by Howard Hawks and starring John Wayne, Dean Martin, and Ricky Nelson. The supporting cast includes Angie Dickinson, Walter Brennan, and Ward Bond. The script was written by Jules Furthman and Leigh Brackett, based on a short story by B.H. McCampbell.

In the town of Rio Bravo, Texas, former sheriff’s deputy Dude (Dean Martin), who has acquired the contemptuous nickname Borrachón (pronounced: [bo.raˈtʃon], Spanish for “drunk”), enters a saloon to get a drink. Joe Burdette (Claude Akins), brother of rancher Nathan Burdette, tosses a silver dollar into a spittoon. Presidio County, Texas Sheriff John T. Chance (John Wayne) appears and kicks the spittoon away, looking at Dude with pity. Dude is shamed by his plight and takes out his anger on Chance whom he knocks out with an ax handle. Joe begins punching him, then shoots and kills an unarmed bystander who tries to intervene.Joe heads to his brother’s saloon, where a bloody Chance arrests Joe for the murder of the bystander. When another patron draws his gun on Chance, Dude shoots the gun out of the patron’s hand.

Chance’s friend Pat Wheeler (Ward Bond) and his supply train stop in town; with a young gunslinger, Colorado Ryan (Ricky Nelson), riding guard. Inside the jail, Stumpy (Walter Brennan), Chance’s deputy, keeps watch over the jail and Joe. A mysterious woman nicknamed Feathers (Angie Dickinson), is shown playing poker.Dude and Chance patrol the town. Carlos stops the sheriff, saying Wheeler was talking too much about Chance needing help. Chance implores Wheeler to stop, as it will draw attention from the wrong people. Wheeler suggests that Colorado could be of assistance, but Colorado politely declines saying he wants to “mind his own business.”. Colorado also promises not to start any trouble without telling the sheriff first. Feathers leaves the poker game a winner. Chance follows her up to her room and confronts her as a card cheat, with his evidence three missing aces from the deck of cards being used in the game and a handbill indicating she was wanted for card cheating. Colorado arrives saying another participant in the game is the real cheat and plans to confront him with Chance’s acquiescence. As Wheeler is walking back to the hotel he is shot dead by a Burdette man hiding in the stable. Colorado offers to help but is angrily turned away by Chance who says “you had a chance to get in this and you didn’t want it.” Chance and Dude flush out the shooter, who escapes into Nathan’s saloon after Dude wounds him. Dude believes the man had muddy boots, but everyone in the bar has clean boots. Two patrons suggest Dude is a drunk who needs a drink and one man throws a silver dollar into a spittoon. The bartender puts a beer on the bar in front of Dude. Dude notices blood dripping into the beer from above, turns, fires and kills the shooter.Chance goes back to the hotel to sleep and unbeknown to him Feathers stands guard at the door to keep him safe, then returns to her room when he awakens. Chance asks Feathers why she did that, but she does not say. Chance insists that she should leave on the stagecoach. Nathan Burdette (John Russell) later arrives in town with his men, intent on seeing his brother Joe. Dude is standing guard and confiscating all guns from people entering town. One of Burdette’s men thinks Dude is crazy and tries to enter town until Dude cuts one of this reins with a single shot. Nathan agrees to turn in their guns until they leave.

Carlos says Feathers will not get on the stagecoach and when Chance goes to see her she tells the sheriff that she does not want to leave, then gives Chance a kiss. After Colorado visits the jail to tell Chance the meaning of the song Nathan is playing, Chance gives Dude his guns back (the ones he had before he left town, sold by Dude but bought by Chance) as well as some clothes he left behind.The next morning, while Dude is standing guard at the town entryway, four Burdette men attack him from behind and tie him up in a stable. They draw guns and corner him (Chance’s rifle is out of reach), and demand that he release Joe. Inside the hotel, acting on Colorado’s instructions, Feathers throws a flowerpot through a window a moment after Colorado steps out on the porch, distracting the Burdette men. Colorado throws Chance’s rifle to him and the two men shoot the three Burdette hands.
The group decides to hole up in the jail, as it will take several more days for the United States Marshal to arrive to take Joe to the Presidio. Dude and Chance go to the hotel to round up additional supplies, but Carlos and Consuela are captured by Burdette’s men and trick Chance into charging and falling over a rope tied at the bottom of the stairs. Dude and Feathers also are captured. Chance is given a choice–take the men to the jail to let Joe out, or the men will arrange a trade with Stumpy for Dude and Chance. Dude implores Chance to let Joe out, saying that Stumpy is alone and has no food or water to hold out very long. The remaining Burdette men at the hotel take Dude and Burdette later offers to trade him for Joe. Chance agrees and the trade is to be made at a warehouse. During the trade, Dude bum-rushes Joe and they scuffle while a gunfight erupts. 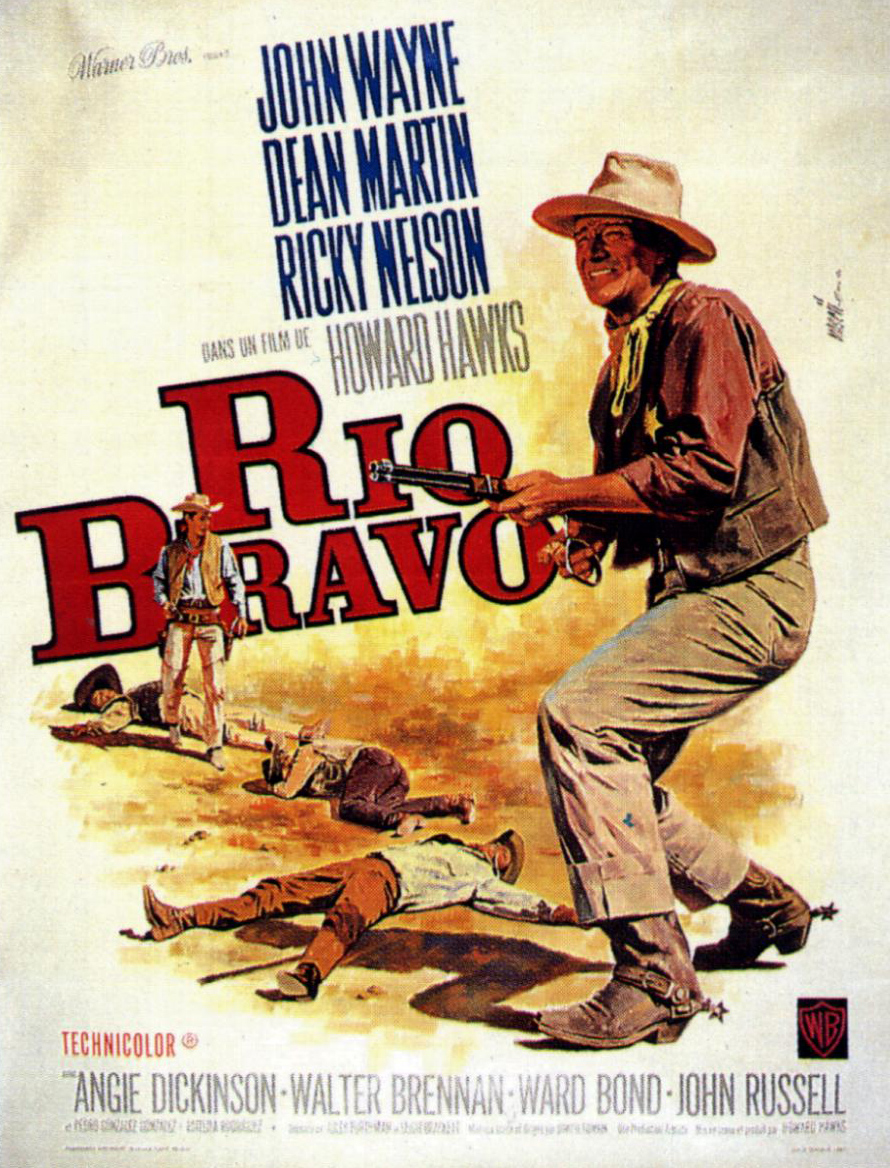