British-born, French-raised and London-based, Hero Fisher (yes, that’s her real name) is returning to release her sophomore LP Glue Moon. Hero’s career has so far seen her collaborate with Alison Mosshart and Boy George in the Mark Ronson-scored ballet Carbon Life, open for The Rolling Stones and Neil Young at Hyde Park, and get shortlisted for the 2014 Glastonbury Emerging Talent Prize. In 2015 she released her debut album, the critically-appraised Delivery which won her fans in The Horrors and Blur. 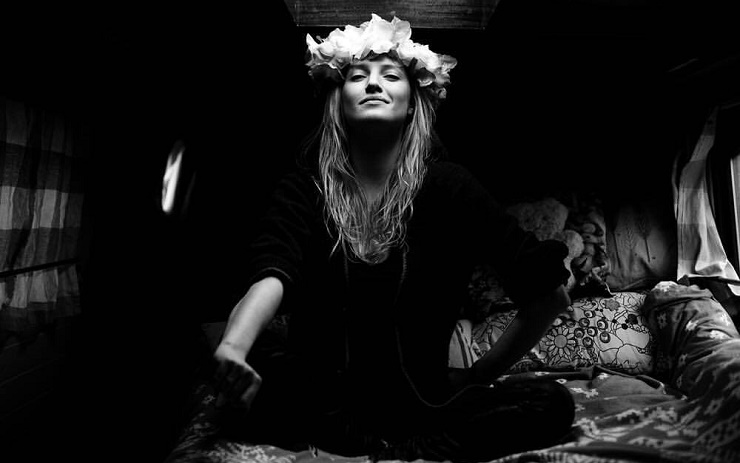 By turns a blistering rock and roller in the vein of Patti Smith and PJ Harvey, and an experimental folk storyteller à la Jeff Buckley, Hero Fisher resists easy generic categorisation with her protean and cinematic musical storytelling. Able to expertly strike a variety of different narrative poses, she is at once the spurned lover and the fired-up rabble rouser, predator and prey. With Glue Moon previous singles ‘Sylvie’ and ‘Push The Boat Out’, Hero’s lyrical imagination proved unique and bountiful. Anthemic latest single ‘I Let Love’ is the latest chapter in her development as an artist, and with fuller production and it She’ll reach many more milestones yet on her creative journey.

“I wanted to write a song where the focus jumped from person to person, like a contagion. The idea was that each verse would be an ordinary “day in the life of” each character, and that whatever was going on was a banal and daily grind. Each character would be possessed with this spirit, making them push on through, and shake off their demons.” Hero Fisher’s ‘I Let Love’ is a rare and powerful treat of rock and roll swagger and pointed observational songwriting. Her narrative lyricism is bolstered by her effortless feel for melodies and song progression. From the timbres of the toms and the smooth steely chorus-soaked guitars to Fisher’s own vocal line, every element forms a vibrant sonic fabric of unforgettable musical sentiment.

It’s about rising above the banalities of quotidian life, escape through desire, and the reflective trappings of nostalgia. The accompanying video runs the gamut of emotions with a stellar performance by its donkey marionette star enjoying a day at the beach and the aquarium. ‘I Let Love’ reveals the tentacular nature of Hero’s songwriting powers, ever extending into new spaces and new ideas.