Ana Rab, better known by her stage name Gnučči is an exuberant Swedish vocalist/rapper/performer/songwriter, quickly on the rise, establishing a name for herself with her unique take of club music. You could call it rap (her skills with quick witted couplets are testament to that). Some call it tropical bass. It is undeniable dance music (just try to stand still), but it’s also pop for a new decade, rich with many textures and sounds. Most simply put, Gnučči uses her interest in a wide field of styles and musical spaces to make bombastic, tropical influences, bass-oriented songs that fuse pop, dancehall, electronica, balkan styles and house. Gnučči served up her debut EP “Oh My Goodness!” under her own imprint Famalam Records/Sony late August 2012. “Oh My Goodness!” went straight to the top 10 on the Swedish iTunes chart, received a prize in the Music-category from Sweden´s biggest entertainment magazine and got nominated in the Best Hiphop/Soul category at the Swedish National Radio award show; P3 Guld. Gnučči also gathered a lot of attention for her highly acclaimed live performance at P3 Guld and it became one of the most talked about segments of the award show. Her second release “PSYCHOHAPPY” EP is due early 2014 and the first single “Finders Keepers” will be out November 1st, accompanied by a video featuring a badass Gnučči and a horse riding girl gang. Whether you are hit by her energetic cadence, witty raps or her charming voice and hooks, Gnučči is proving herself a vital new voice in music. 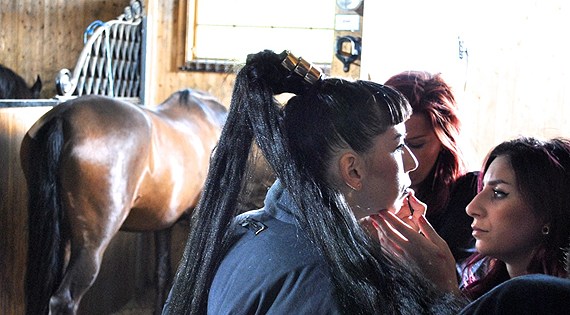