Far Cry New Dawn is a first-person shooter developed by Ubisoft Montreal and published by Ubisoft. The game is a spin-off of the Far Cry series and a narrative sequel to Far Cry 5. It was released for Microsoft Windows, PlayStation 4 and Xbox One on February 15, 2019, and received generally mixed reviews from critics. Similar to its predecessors, Far Cry New Dawn is an action-adventure first-person shooter set in an open world environment which the player can explore freely on foot or via various vehicles. The game is set in the fictional Hope County, Montana and uses a reimagined version of Far Cry 5’s map. The nuclear war portrayed in Far Cry 5 has reshaped the landscape so that new areas have become available for the player to explore while others are inaccessible. Wikipedia®. 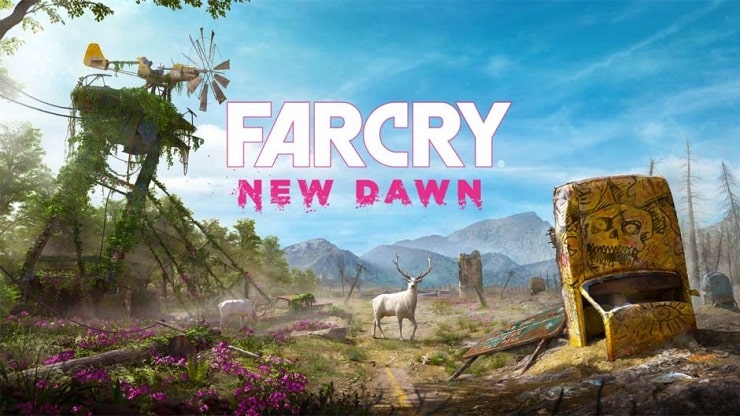 Dive into a transformed vibrant post-apocalyptic Hope County, Montana, 17 years after a global nuclear catastrophe. Join fellow survivors and lead the fight against the dangerous new threat the Highwaymen, and their ruthless leaders The Twins, as they seek to take over the last remaining resources. FIGHT FOR SURVIVAL IN A POST-APOCALYPTIC WORLD • Take up arms on your own or with a friend in two player co-op in an unpredictable and transformed world. COLLIDE AGAINST TWO ALL NEW VILLAINS. • Recruit an eclectic cast of Guns and Fangs for Hire and form alliances to fight by your side against the Highwaymen’s unruly leaders The Twins. BUILD UP YOUR HOMEBASE AND THE SURVIVORS. • Recruit Specialists to upgrade your homebase, who will help unlock all new features including crafting weapons, gear and more. BATTLE FOR RESOURCES IN HOPE COUNTY AND BEYOND. Engage the Highwaymen in Turf Wars and venture on Expeditions to memorable locations across the USA.