Fanshore and Tropic is the vital new collaboration between Londoners Tyler Darrington and Tristan Gibbs (Fanshore and Tropic respectively). Originally the pair met and worked together in a clothes store for about a year, both were in bands but had a mutual interest in each other’s work. Tristan sent Tyler some voice memos with potential material and the duo quickly realised they had a unique chemistry. Though at the start of their career, their debut song ‘Sunlight’ proved an incendiary introduction to their unique style. Tyler’s old school musicianship (funk guitar lines, groovy bass, rare samples, and simple beats), scores Tristan’s natural lyricism. 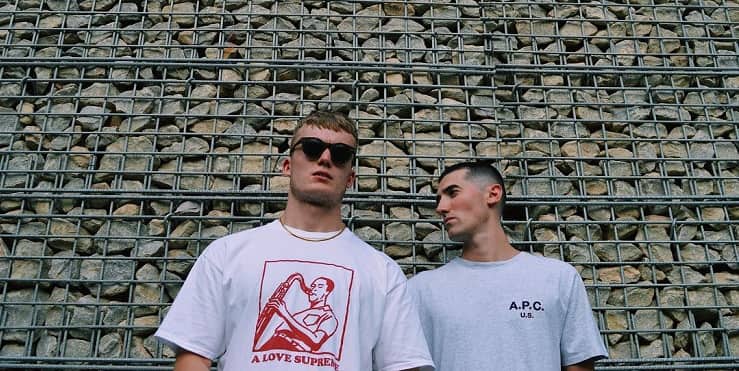 With a mutual love for jazz, soul and hip-hop, and a resolutely homemade production ethos, the duo sound both classic in their old-school flourishes, and thrillingly contemporary in their tendency towards observational storytelling culled from their experience of young urban life. This year has seen them put out ‘Reaper’ which was praised by blogs and received Amazing Radio airplay and Spotify support from Dummy Mag. They also took over Amazing Radio for a show, spinning their favourite new songs, and dropped a remix of Maya Law’s ‘Give Me No Love’ which received airplay on BBC Introducing Norwich and Amazing Radio. Now they’re working on their debut EP with plans to release it by autumn, It will include ‘Reaper’ beside four new tracks. While relatively new, Fanshore and Tropic is already a fully-formed sound, and even the slender body of work they have online exhibits a duo carving their own niche in international hip hop.

A sparse piano line introduces Fanshore & Tropic’s life-affirming new track ‘Soul Define’. In their words it’s a song “about soul defining moments, the moments that shape us and affect our lives, the people that define us, and our relationships with them.” Sonically, it’s tuned to a darker pitch than the rest of their work so far. A jazzy murkiness pervades the mix as the duo playfully experiment through both the production and the vocals. Resisting easy hooks or repetitive ideas, the vocals veer between sung hooks and full on rapping without ever coming off predictably. Tristan’s bars are held together by his ear for internal rhymes and the music of language, as Tyler’s ear for texture and space in the song guides listeners into their meditative mindset. It’s another swerve ball from the duo, whose eclectic approach to music, and the themes in their songs, have seen them cut an utterly distinct path through UK hip hop.