Enslaved: Odyssey to the West is an action-adventure platform video game developed by Ninja Theory and published by Namco Bandai Games. It was released on PlayStation 3 and Xbox 360 on October 5, October 7 and October 8, 2010 in North America, Australia, Japan and Europe respectively. The story is a re-imagining of the novel Journey to the West written by Wu Cheng’en. Unlike the original story that was set in a fantastical version of ancient China, the game is set 150 years in a future post-apocalyptic world following a global war, with only remnants of humanity left, along with the still active war machines left over from the conflict. Like the original story however, the plot revolves around someone who forces the help and protection of a warrior, with many characters sharing the same names and roles. The game’s story was written by Alex Garland, with voice talent and motion capture from Andy Serkis and Lindsey Shaw. Wikipedia®. 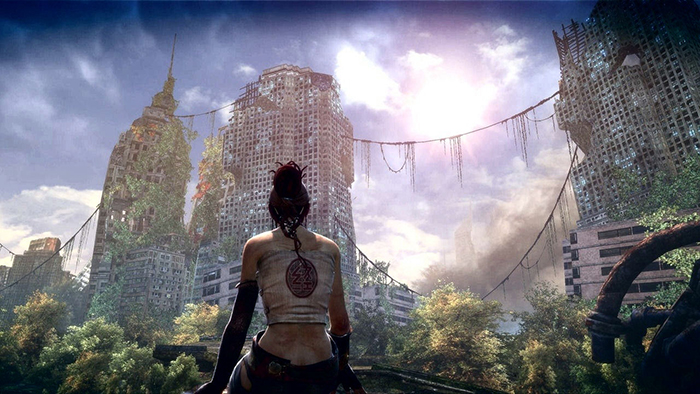 The player takes control of Monkey, with Trip being controlled by the game’s A.I.. Enslaved’s gameplay is quite similar to Heavenly Sword’s, or most hack and slash games. However, Ninja Theory have said combat is much more tactical and slower paced, with the player needing to use gadgets to scout ahead and plan their movement and attacks. Trip achieves this using a small, robotic dragonfly, which can be controlled remotely to search areas for enemies. The position of enemies is then displayed on the player’s HUD, allowing them to avoid confrontation by sneaking past them, if they should choose to. It is also possible for Trip to project a shiny hologram as a distraction while Monkey sneaks up on enemies to take them down from behind. While Monkey can use health packs scattered throughout levels, Trip can also heal Monkey when instructed with limited health pick ups.