Borderlands: The Pre-Sequel Trainer. Borderlands: The Pre-Sequel is a first-person shooter video game developed by 2K Australia, with assistance from Gearbox Software and published by 2K Games. It is the third game in the Borderlands series, serving as an interquel between the original Borderlands released in 2009 and its 2012 sequel Borderlands 2. It was released for Microsoft Windows, OS X, Linux/Steam OS, PlayStation 3 and Xbox 360 on 14 October 2014. The rumored existence of the game was first reported on 7 April 2014, and it was officially announced two days later on 9 April 2014. Similarly to previous Borderlands titles, the game combines FPS gameplay with mechanics common to role-playing video games (such as quests, character building and randomly generated “loot”), and collaborative multiplayer campaign gameplay. The storyline of The Pre-Sequel focus on four playable characters—all of whom were NPCs or enemies in previous Borderlands games, working as henchmen for Handsome Jack, the antagonist of Borderlands 2. The plot follows Handsome Jack’s descent into villainy, focusing on his escape and capture of the Hyperion company’s base on Pandora’s moon Elpis. The game expands upon the engine and gameplay of Borderlands 2 and introduced new gameplay mechanics, including low-gravity environments, freeze weapons, and oxygen tanks which are used to navigate environments and perform special attacks. Wikipedia®. 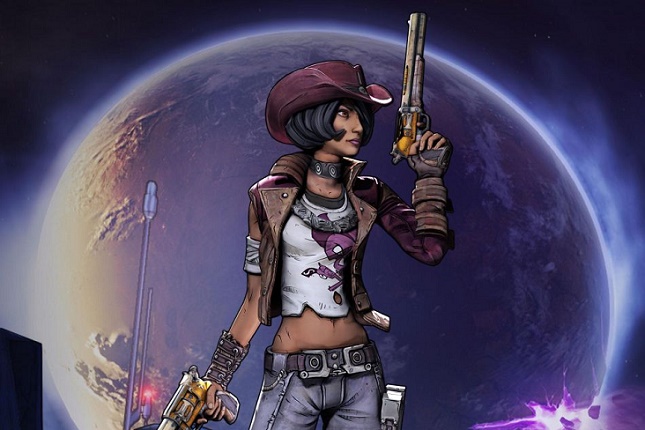 The Pre-Sequel received mixed to positive reviews; while praised for its new gameplay features, maintaining the trademark humour of previous entries in the Borderlands series, and for appealing to long-time fans of the franchise, the game was characterized by some as an expansion pack for Borderlands 2 that did not provide many significant deviations from the core mechanics of its predecessor. Launch into the Borderlands universe and shoot ‘n’ loot your way through a brand new adventure that rockets you onto Pandora’s moon in Borderlands: The Pre-Sequel! Discover the story behind Borderlands 2 villain, Handsome Jack, and his rise to power. Taking place between the original Borderlands and Borderlands 2, the Pre-Sequel gives you a whole lotta new gameplay featuring the genre blending fusion of Shooter and RPG mechanics that players have come to love. Float through the air with each low gravity jump while taking enemies down from above using new Ice and laser weapons. Catch-a-ride and explore the lunar landscape with new vehicles allowing for more levels of destructive mayhem.